Visioning for the future

A world-renowned destination of choice for tourists, the Cairns Regional Council local government area of Queensland encompasses 1687 km2 of diverse landscape on a narrow coastal strip between the Great Dividing Range and the Coral Sea. The region is part of Australia’s Wet Tropics and framed by the World Heritage listed Wet Tropics rainforest to the west and north, and the Coral Sea and World Heritage listed Great Barrier Reef Marine Park to the east. Cairns was officially founded in 1876 and named after the State Governor of the day, Sir William Wellington Cairns. The small community of Cairns that was formally declared a town in 1903 with a registered population of 3500 bears little resemblance to today’s thriving city of 165,000.

Cairns city is now the principal centre of the region, centrally located along the coastal strip with sub-regions to the north and south consisting predominantly of good quality agricultural land and areas of high ecological significance. The region is an important gateway to the nearby Atherton Tablelands, Daintree and Wet Tropics rainforest, and the outback Savannah region beyond the Great Dividing Range.

Bob Manning has been Mayor of Cairns Regional Council for eight years and is running again in March for another four. Why? “Because I love it!” Manning admits. “Along with our geographical ties to the Great Barrier Reef and Wet Tropics, we are also home to two of the longest living cultures in the world. The Australian indigenous people who have been here for 55 or 60 thousand years and the Torres Strait Island people – two very distinctive cultures. Those  four main features really make us tick. We are new to the international tourist game (about 20 years), but we’ve grown dramatically in that time.” Indeed, tourism is the lifeblood of the Cairns economy with other industries centring around aviation, education (especially international), shipping, health services, professional services, mining, aquaculture and agriculture. 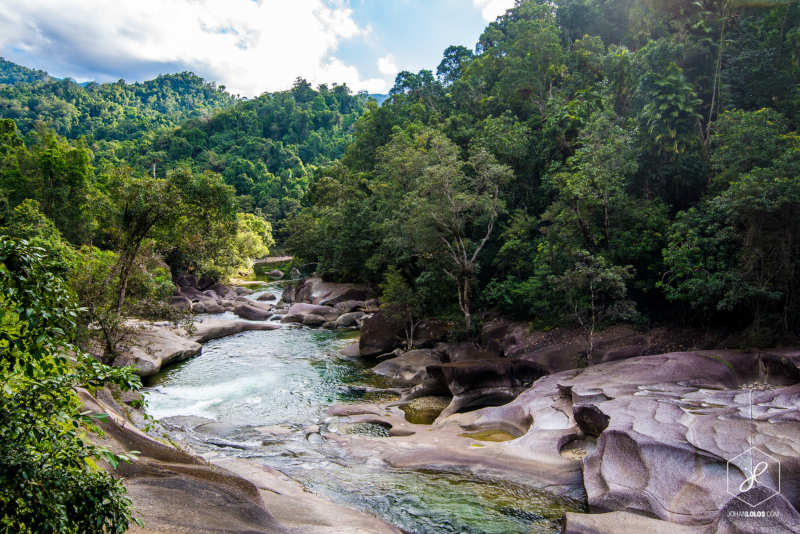 The GRP (Gross Regional Product) hovers around $10 billion for the city of Cairns, whereas the region is around the $16 billion mark. It’s a very active economy seeing significant growth over a number of years. Planning for the future, the Council, along with key stakeholders, developed the Cairns Shared 2050 Vision document which has been submitted to the federal and state governments – a very detailed report outlining the direction Cairns wants to take over the next 30 years. Manning notes, “That provides a foundation for us to enter into discussion with the federal and state governments, so the three levels of government can work together to generate this outcome. At the end of the day that’s the only way we’ll get anywhere.”

Extremely involved in contemporary issues, the Council recently convened a Youth Climate Summit that brought 36 bright and impassioned young students and teachers together to hear their aspirations, hopes, fears and suggestions on climate issues. Attendees reported back to Council on their goals and, according to Manning, “It was incredibly constructive and so reassuring to bring a group of young people together, where they must be very doubtful and questioning where things are going with the climate globally. They wanted to get a message across, they wanted to know that we care, that we were interested. And we all came away from that a lot smarter and a lot closer together.”

At the Cairns International Women’s Day breakfast in 2018, 10-year-old Molly Steer received the Cairns Young International Woman of the Year award for starting the ‘Straw No More’ campaign in an effort to eliminate single use plastics, the most abused of which are drinking straws. In her acceptance speech, she challenged Mayor Manning to pick up the Straw No More campaign from her. Eager to take up the gauntlet, the Mayor stood up and promised that the Council would work with her and promptly took the issue to the Queensland State conference which resulted in 77 Councils all agreeing to take on this challenge.

Cairns Regional Council is on track to meet its emissions target of reduction of 50% by 2020 and seeking to set a new target of 100 percent renewable energy. Power Purchasing Agreements (for renewables) and carbon farming projects are being investigated as possible options to achieve the goal. Also on the sustainability front, a $14.5 million upgrade to the Materials Recovery Facility (MRF) will allow Council to address its recycling needs for the next decade. The upgrade will bolster the MRF’s processing capacity and boost the amount of waste diverted from landfill from 50-60% to 85-90%. It will also double the MRF’s processing capacity to 30,000 tonnes a year, while new, state-of-the-art technology will streamline the facility’s sorting capabilities. A glass sorting and processing plant will be delivered as part of the upgrade, allowing Council to recycle glass locally. Glass will be crushed and cleaned on site, then repurposed as a sand substitute in non-structural concrete works, such as kerb and channelling, footpaths and cycle paths. The new infrastructure will increase the facility’s viability, improve recycling recovery rates and decrease the amount of waste ending up in landfill.

The Regional Council abides by the philosophy that if you get the finances right then everything else will follow. True to form, this will be the sixth year that Council has handed down rate rises at or below CPI, while delivering a total of $870 million in Capital Works over that time – this coming year that number will exceed the $1 billion mark. Debt per capita in Cairns is the fourth lowest among 15 similar-sized Councils in the State. The Council has also handed down balanced budgets since 2013 and delivered surpluses in operating expenditure over the past six budget cycles. 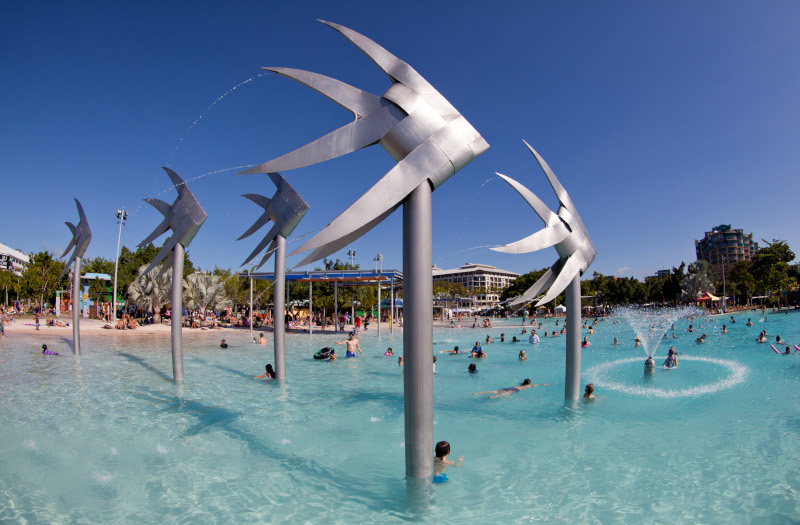 Signature Fish at the Cairns Lagoon on the Esplanade

The latest budget also partially funds major projects to attract locals and tourists, including: the $3.6 million completion of the Court House refurbishment as part of the broader Gallery Precinct (in the CBD), and commencement of a major upgrade to the Esplanade Dining Precinct and Stage 3 of the Shields Street project, with $3 million allocated this year and $13.5 million next year. Florence Street will be redeveloped to provide improved pedestrian connectivity from the CBD to the Cairns Performing Arts Centre and Munro Martin Parklands, with nearly $10 million allocated this year and $5 million in the next budget to complete the project. An additional $7.4 million will progress the much anticipated Northern Beaches Leisure Trail (from the CBD to Palm Cove) and join the Wangetti Trail extending Palm Cove to Port Douglas.

Manning acknowledges, “We have a fair bit going on around town that’s underpinning our tourism industry and giving a lot of confidence. Where we are struggling is with a drop off of tourist numbers. Council is currently pursuing a sustainable tourism funding model for Cairns in the form of a tourist levy equal to the price of a cup of coffee (ex: an accommodation house charging $150 a night would generate a levy of $3.75 per night). This will generate in excess of $17 million per year which will go to the Regional Tourism Association as a huge marketing budget for our region.”

Cairns is also dedicated to establishing itself as a hub for arts and culture. The Mayor elaborates, “In 2019, we opened up a new 1,000 seat Performing Arts Centre which is just stunning. It’s amazing how that can change the personality of a city. We are moving now towards a precinct of four art galleries in the CBD; three of those are heritage listed buildings that are joined together. And the fourth will be an innovative new-build exhibition gallery. Indigenous artwork is craved the world over and is unbelievably beautiful. Every year we run the Cairns Indigenous Arts Fair, the largest in Australia, and we intend to make that even more spectacular. We want Cairns to be Arts and Culture Capital of Northern Australia.”

Last year, Mayor Manning spent two weeks with about 90 other people as part of ClimateForce 2041 on a study tour in the Arctic Circle – observing and learning more about climate change and gathering a better understanding of what’s happening in the world. Manning admits, “It was a life-changing experience and a real eye opener. Cairns Regional Council is a nature-based destination adjoining two World Heritage listed areas, embracing two of the world’s longest living cultures, and we owe it to the planet to do everything we can to protect these precious assets. We, of all regions in the world, should be seen as the cleanest and the greenest. That should be our character, our appearance, everything about us. And not being dragged along, we should be leading the way. We want to be at the forefront – when people see Cairns or the Great Barrier Reef or the northern sharp end of Australia they should think that’s the place where it’s all happening.”

Growth in the tourism industry in Cairns has exceeded expectations. In that regard, a plethora of tourism-related development projects have recently been undertaken or commenced to enhance the landscape of the city and region as a destination. Those include:

and take about 13 months