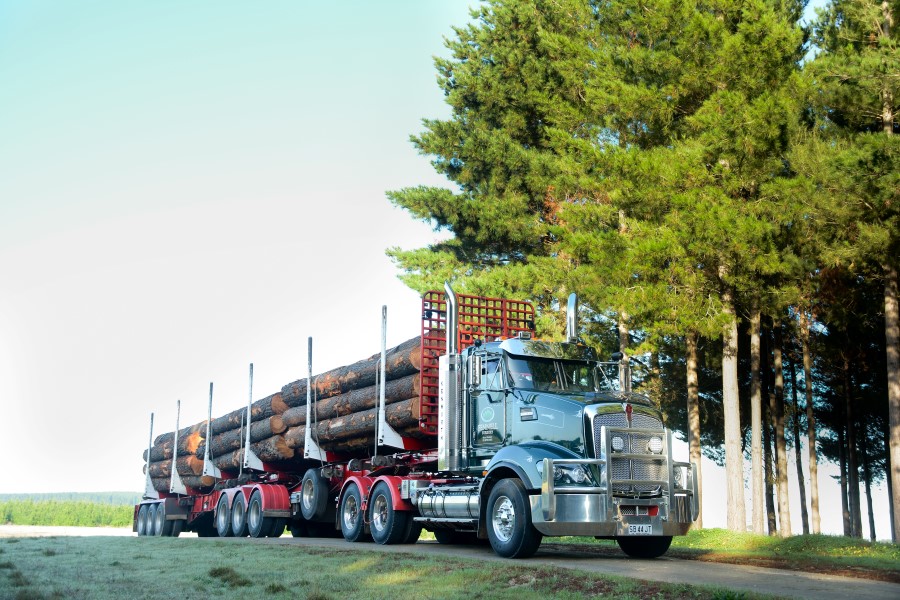 The Green Triangle is home to one of Australia’s largest commercial plantation forests, providing ample opportunities for local businesses in the forestry sector. Fennell Forestry, a family-owned business, has been in the game since 1991. Though it started small, it has since grown into a major plantation hardwood and softwood harvester and transporter. The company, which employs about 70 staff, is still largely managed by members of the Fennell family. Wendy Fennell, Managing Director at Fennell Forestry, has been a part of the business almost since its inception. 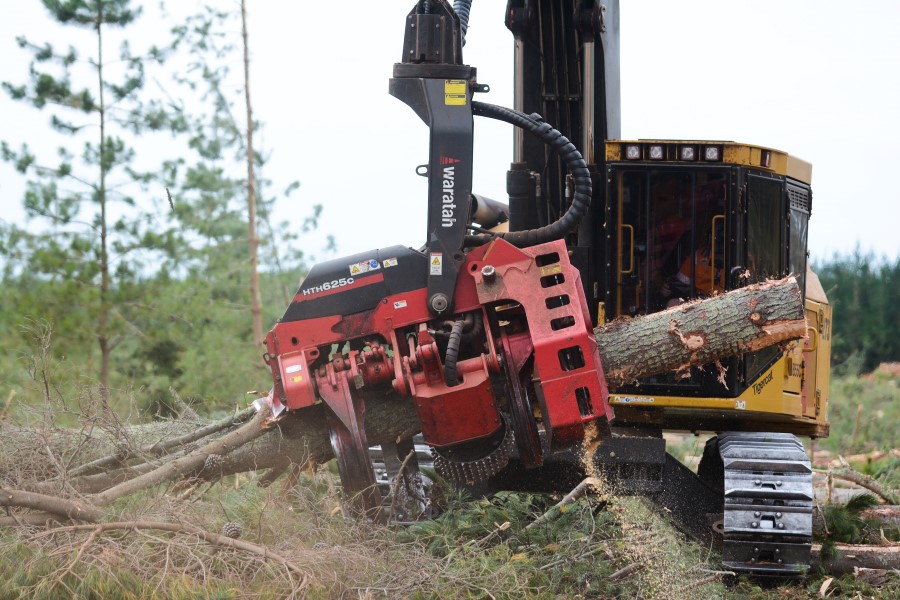 During her years in Fennell Forestry, Wendy has seen quite a lot of changes in the industry. Technological advancements and changes in rules and regulations have all contributed to the transformation of the industry though the company’s philosophy and ethics have largely remained the same. In fact, the brand recently went through some major changes after expanding its business into the woodchip industry.

“We’ve just been through quite a big growth stage. We went from harvesting and transporting hardwood log into harvesting and transporting chip which required an overhaul of operation and introduction of new equipment to suit. That’s happened recently, in the last couple of years, so we’ve expanded quite a bit on this thus far. Barry’s working on innovations that complement the service we provide, the harvest of the timber on the site and how we can help the customer extract the most value out of their assets”, says Wendy. 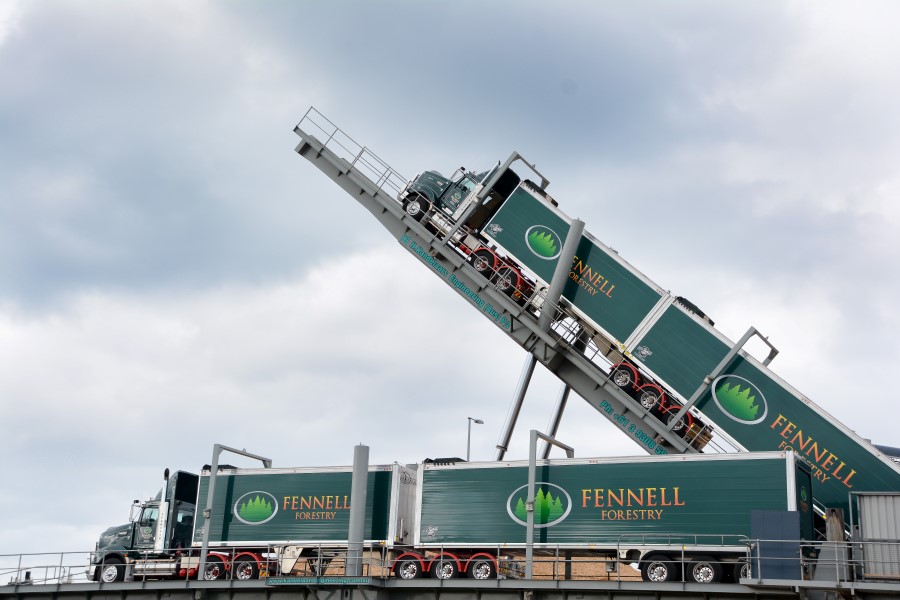 Barry’s innovative work was also complemented, in turn, by major advanced in technology. As one might expect, forestry is an industry that’s almost unrecognizable from its early years. Almost every single piece of equipment that is involved in forestry has evolved in one way or another.

“We originally commenced our business with manual blunt force. So they just used chainsaws and cut the trees down, sawed all the large trees. Then we moved to mechanical harvesting with the implementation of harvesters. Other technologies have been heavily involved, from the harvesters that cut the logs to the kind of trucks we use. For example, on-board electronic scales which allow you to weigh the product while it’s on the vehicle. There’re have also been advancements in the forestry equipment itself, like the computers that are running the harvesting heads”, comments Wendy. 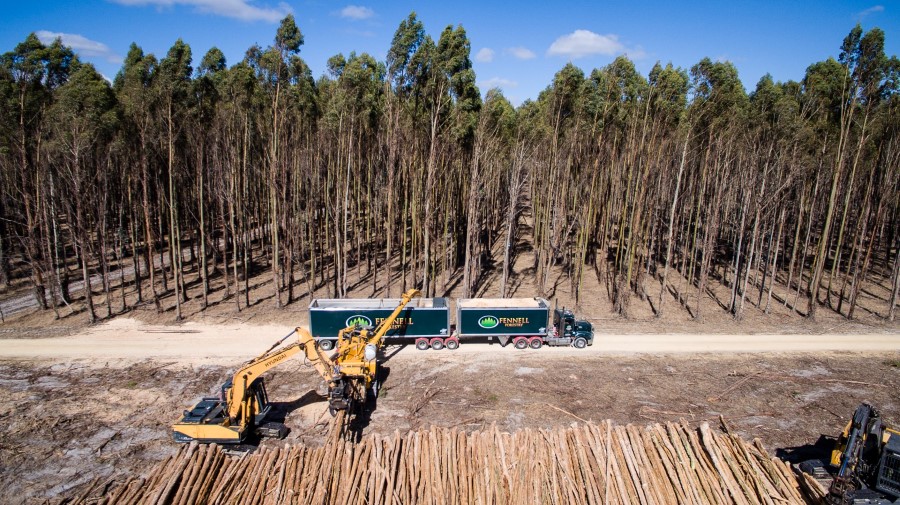 Fennell Forestry has taken advantage of these developments while also keeping in line with the regulations of the field. Logistics, for example, are “more heavily compliance based”, according to Wendy. Everything needs to be documented and auditable so that it meets the legislative requirements. Wendy calls this a part of the “logistics puzzle” which is ensuring that the requirements of both the customers and the legislative authorities are fully met.

The supply chain, another important part of the business, has also gotten bigger over the years. The company’s mission statement of providing “consistent quality service to customers” involves a lot of hard work. Finding the right equipment requires a lot of research and smart purchase decisions. Afterwards, the company also has to train the right people for the right job so that the equipment is properly used and maintained. Preventative maintenance also plays an important role in the consistency of the service as it ensures that the company can always deliver its services when needed.

An employer of choice

As far as the work environment goes, Wendy is an adamant believer in being an “employer of choice”.

“We like to try and accommodate that work-life balance for our employees. We try to give them structured work times so they are home every night, especially the transport side of it with the trucks. We double-shift most of our operations so there’s no pressure on them to work long hours” 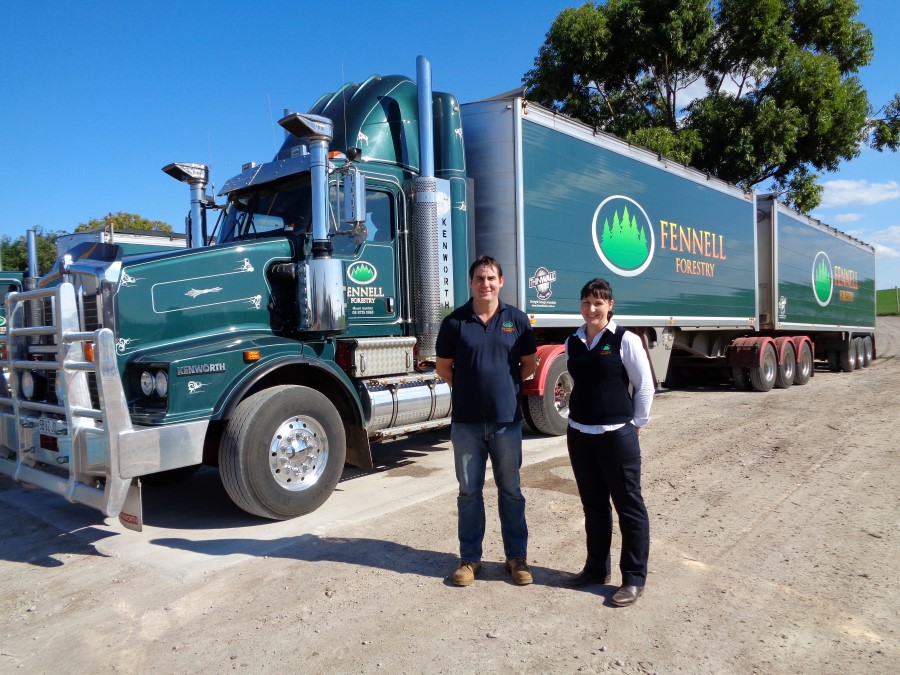 The company’s involvement in the community means, in part, that it’s always ensuring a stress-free environment for the employees. Aside from the fact that Fennell Forestry supports and sponsors a number of local sports clubs and events, it also ensures that each of its employees feel comfortable in their work and that they can maintain a balance between their professional and personal lives.

“We are heavily involved in the community. We support sporting clubs and events that our employees are involved in. We also run an annual truck pull where we raise money for Variety. We’ve raised about $36,500 for charities including Variety and the Make-A-Wish foundation. What we try and do is operate a workplace where safety, efficiency, and productivity are top priorities”, says Wendy.

The annual truck pull is actually one of the most exciting events for the company. A number of local businesses and teams have shown an interest ever since the first truck pull organized by the company in 2013. The event is bigger and bigger every year and videos of the competition are readily posted in the company’s website for everyone to enjoy. And as the team at Fennell Forestry puts it, the real winners are the charities like Variety who receive considerable sums from the event.

Despite any traditional roots, Fennell Forestry is a modern company that not only adheres to new standards but also attempts to revitalize and reshape the field whenever possible. For instance, communication with clients in the forest industry was traditionally limited. Once a company was awarded a contract, most of the work was done during that period. However, Fennell Forestry wanted to change that by interacting frequently and directly with customers to come up with new solutions and improvements. 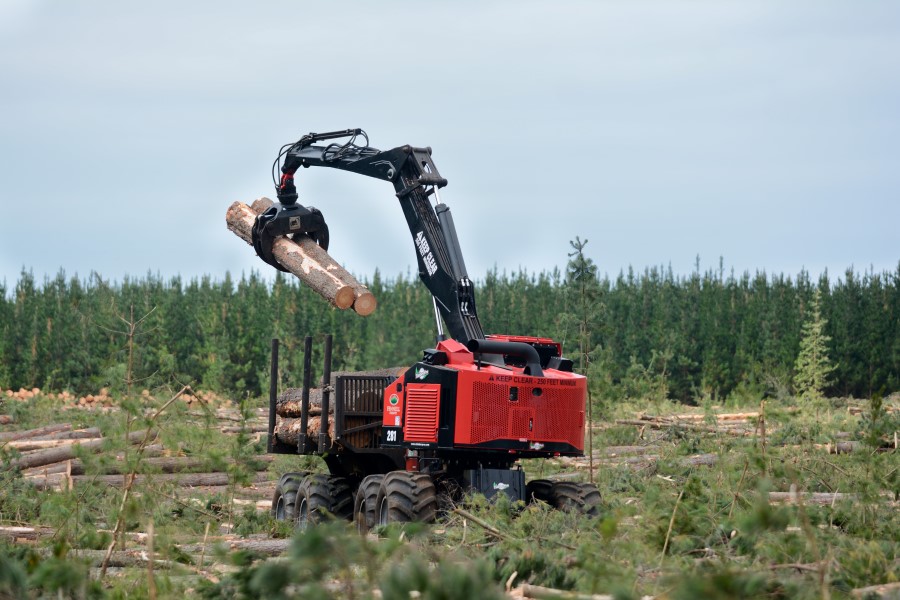 “We made a conscious decision to engage with our customers throughout the term of the contract, to work on continuous improvement and innovation and try to understand their business and how we could come up with gains that would benefit both ourselves and the customer. For us to innovate better we need to fully understand what’s driving the customer. Initiating meetings with them and continuously asking questions that we want to know the answers to has enabled us to come up with solutions for them that they weren’t even necessarily looking for at the time. That’s worked really well and the companies that we contract to have been very open to this kind of engagement and they have really worked well with us, they’ve been very approachable”, recounts Wendy.

Looking to the future by celebrating the past

Thankfully, the company’s work has not gone unnoticed. Aside from the fact that it has grown substantially as a company, a variety of its members have received awards and recognition for their work in the industry. Graham Fennell, Wendy’s father and founder of the company, was inducted into the National Road Transport Hall of Fame in 2015 alongside John Bignell, another company employee. Wendy herself was named the Women and Business and Regional Development’s Business Woman of the Year in August of the same year. The company itself was also a finalist in the large business Brand SA award held in October 2015.

As for future aspirations, Fennell Forestry is not about to rest in its laurels. Success is a continuous road, full of bumps, troubles and, of course, rewards. The goal is simple: “To grow a sustainable, quality business that continues to provide career options for the people of the region as well as providing innovative solutions to our customers to improve the supply chain as a whole”. If the company’s path so far is any indication, its future certainly looks bright as well.

WHAT: A major plantation timber harvest and transport company with a history of 25 years. 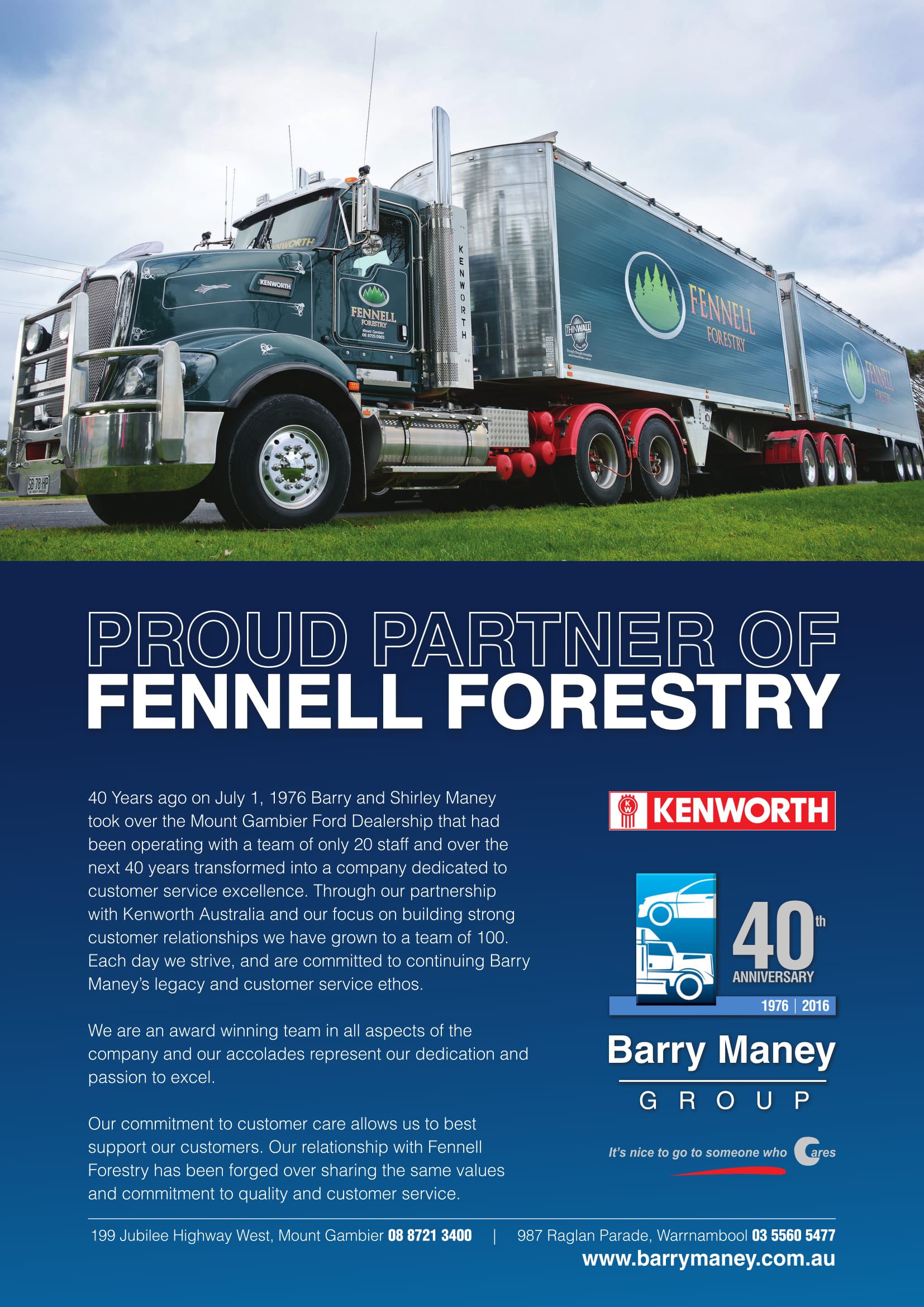 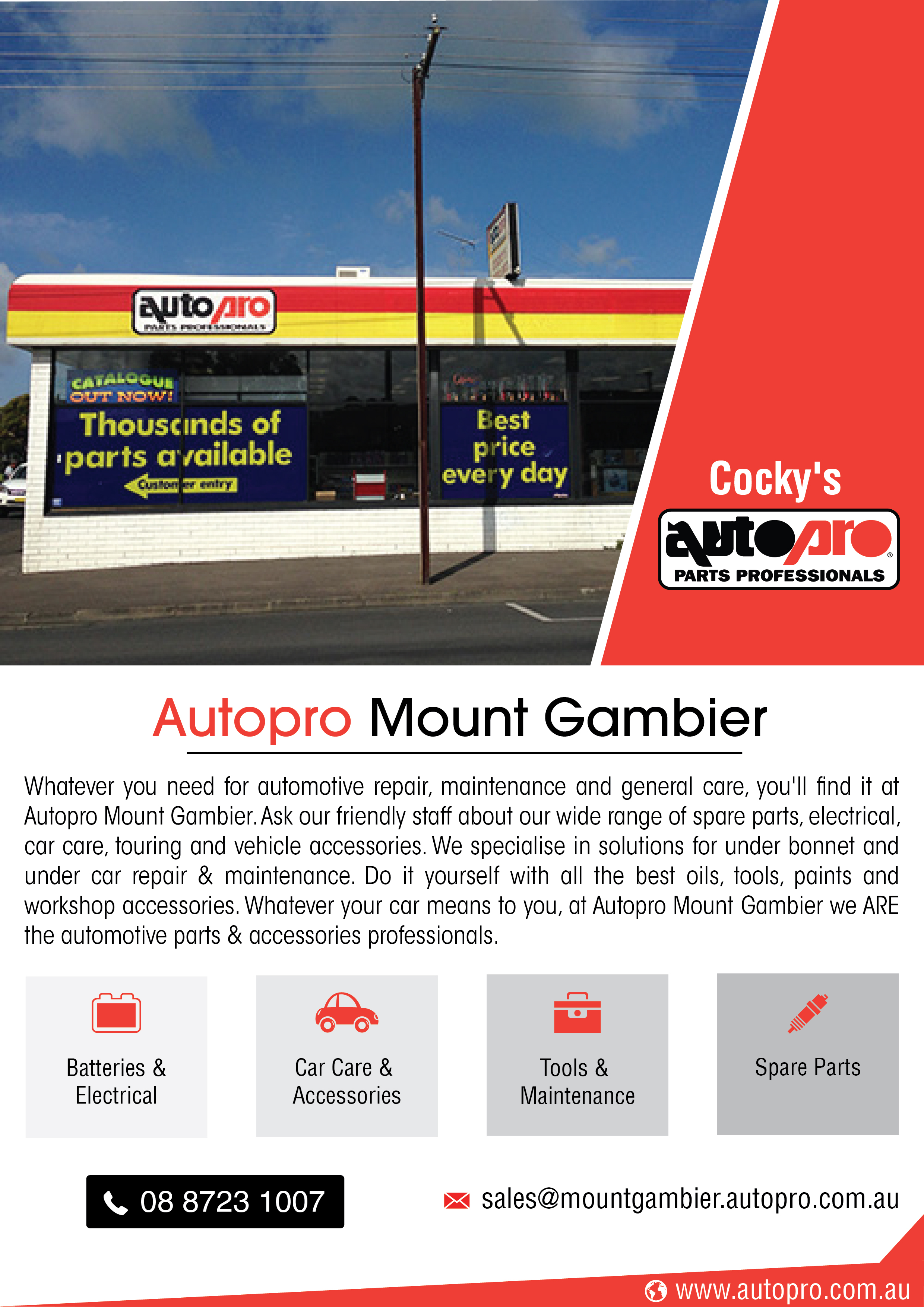 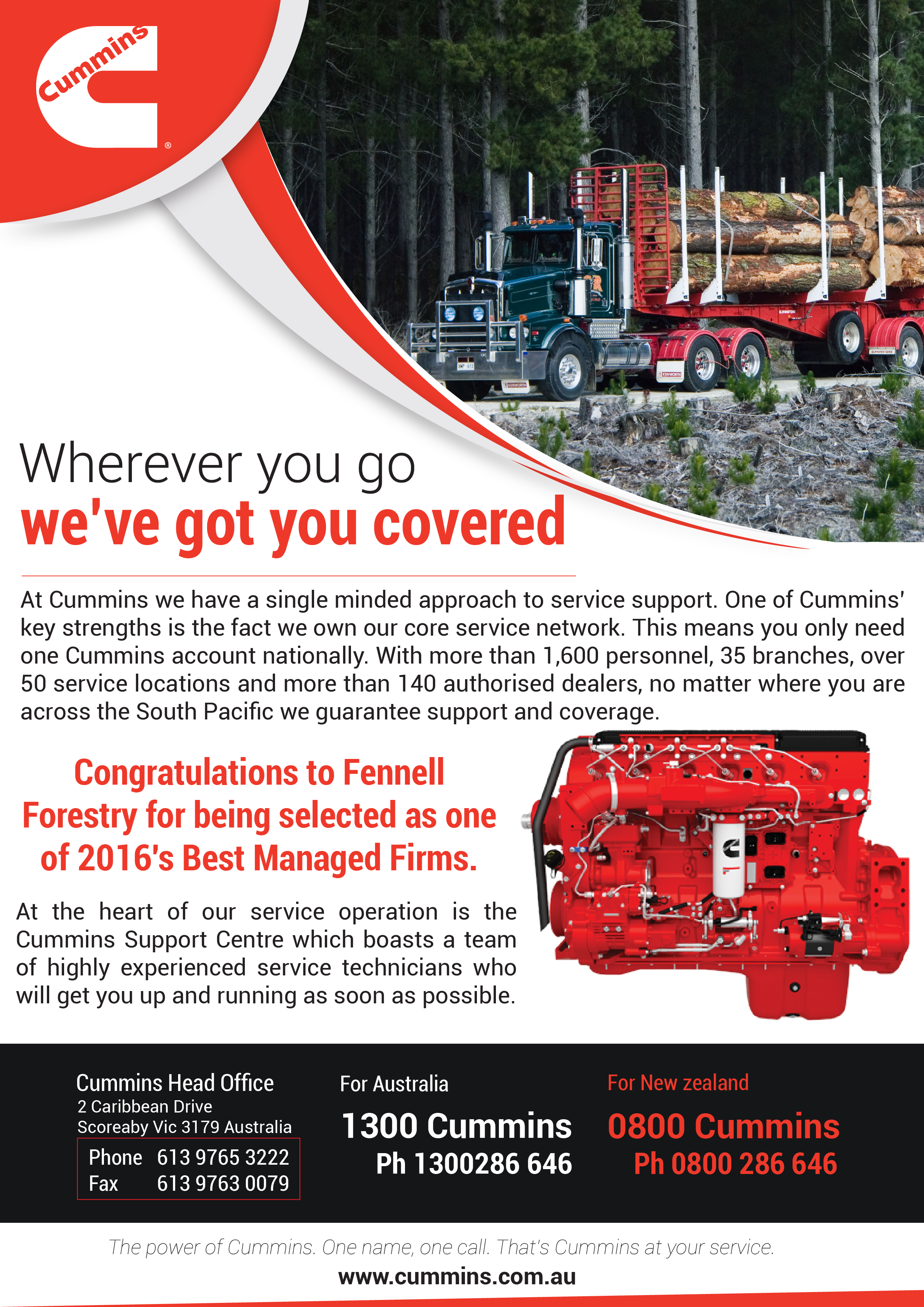 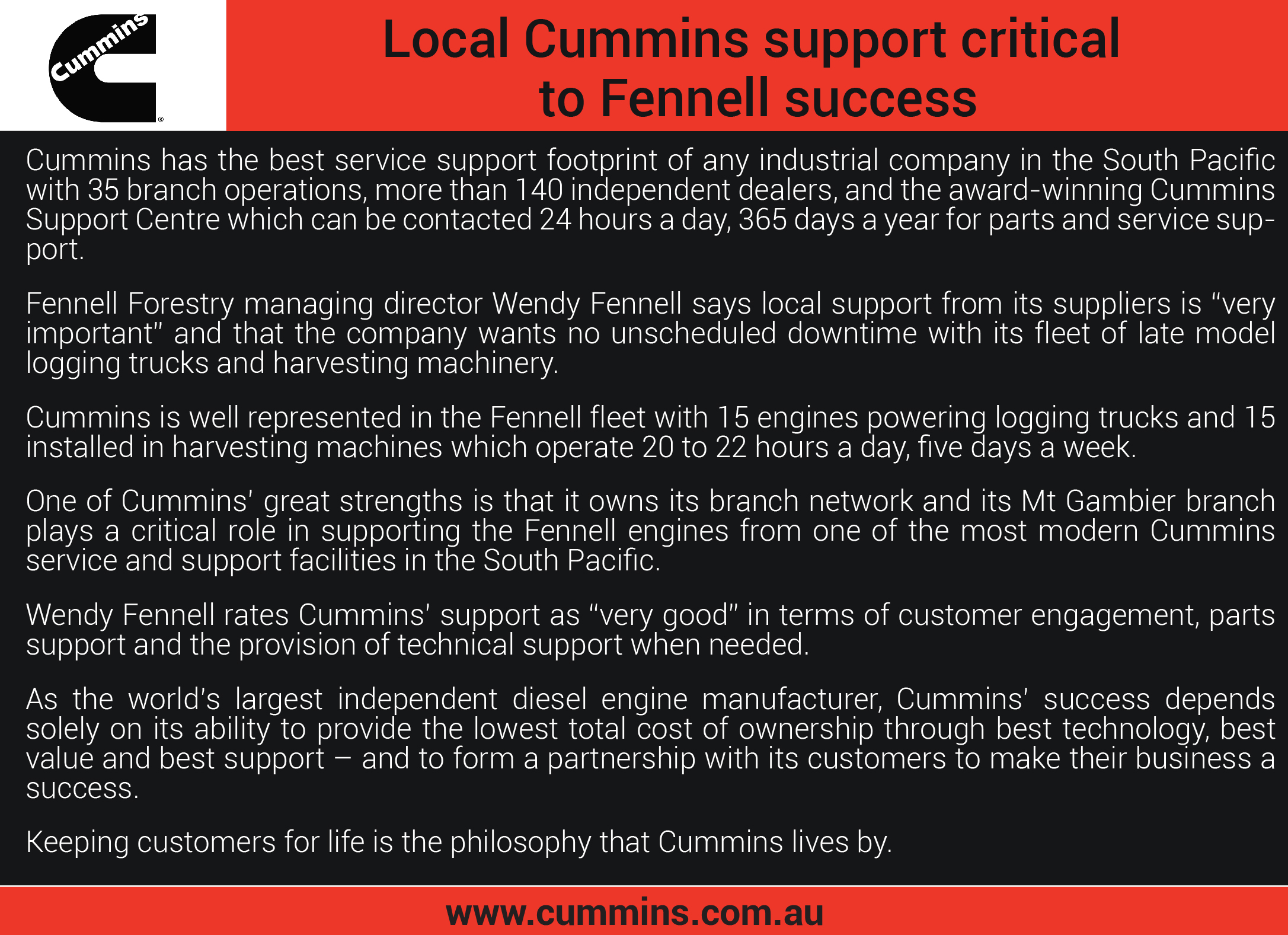 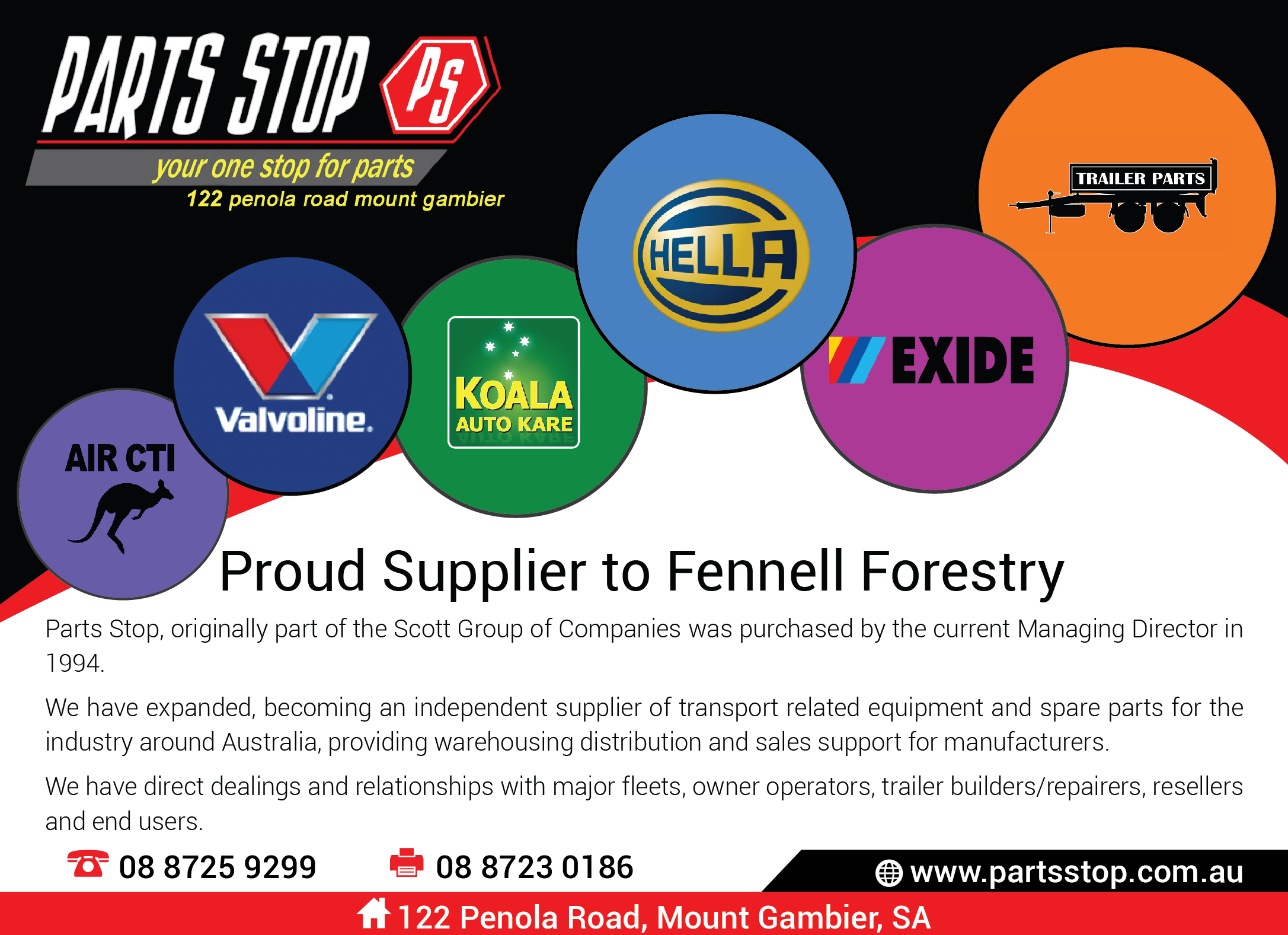 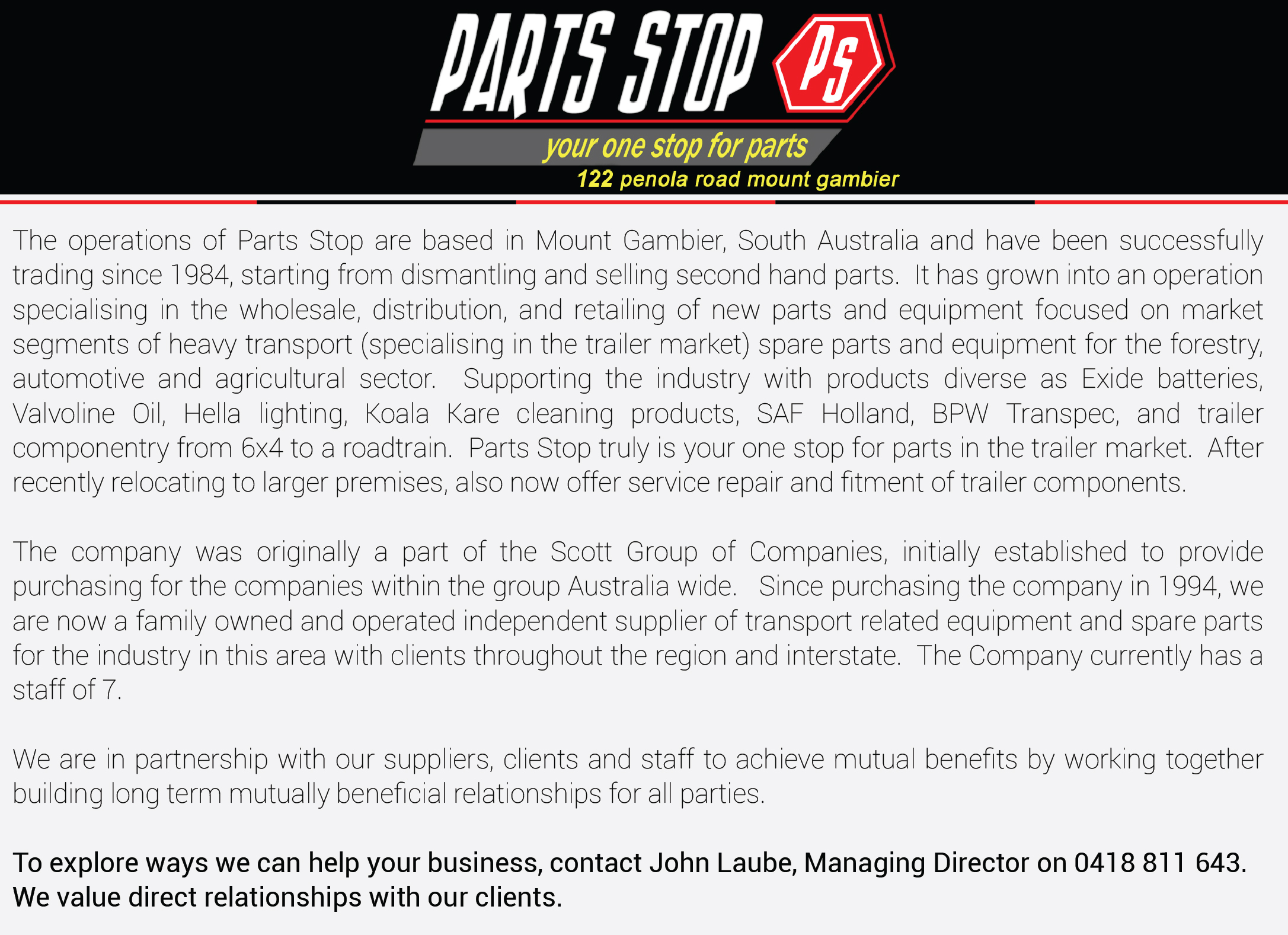 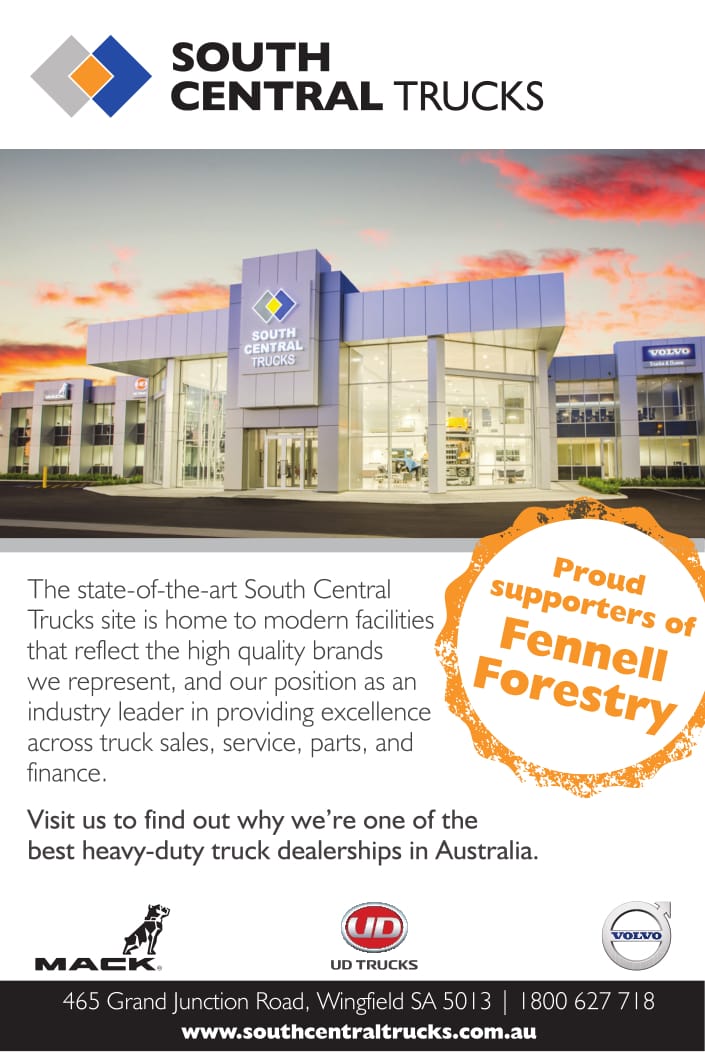 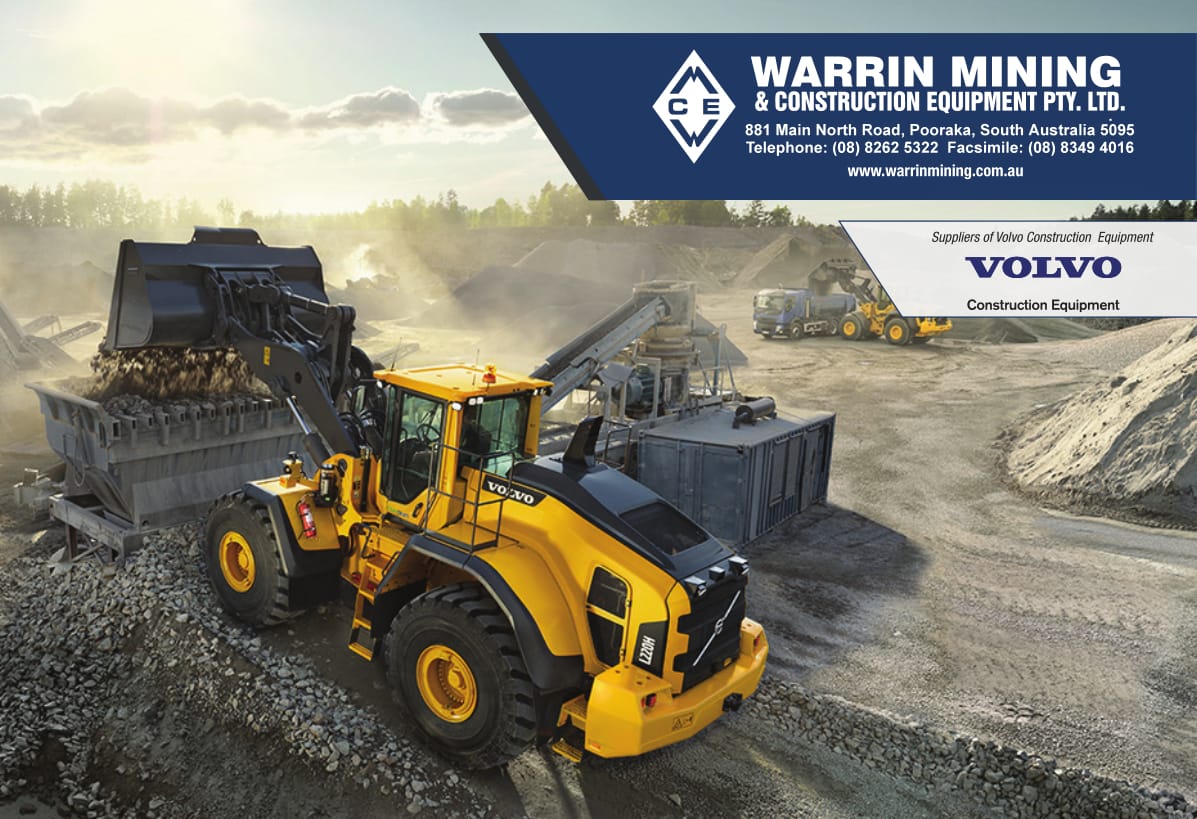 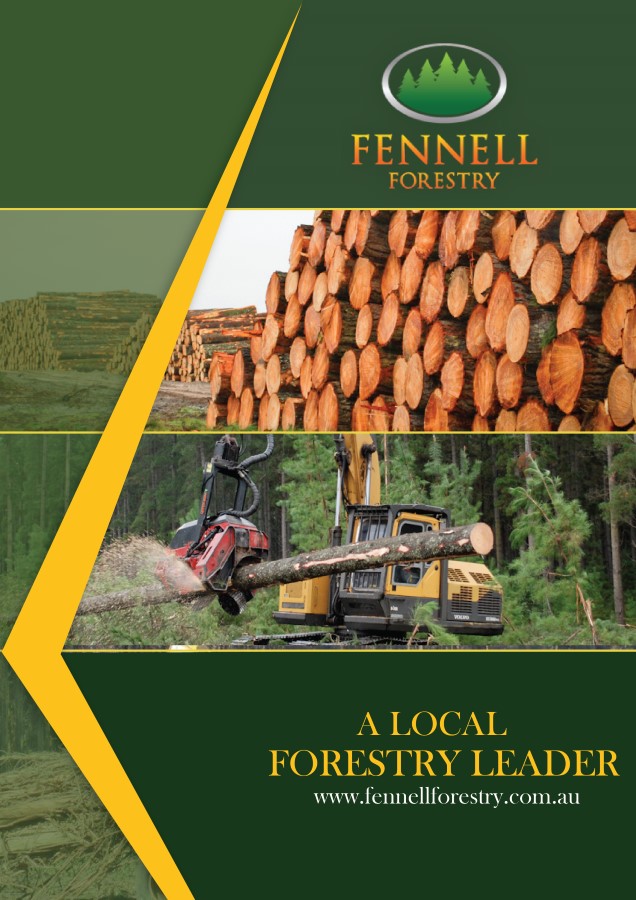