An update on the industry in New Zealand

Geothermal is an important energy source in the Western Pacific including the Philippines, Papua New Guinea and Japan. A number of Pacific nations such as Vanuatu, Samoa and the Marianas have the potential to develop geothermal resources. This article examines the current state of one of geothermal energy’s original pioneers: New Zealand.

While New Zealand has ancient and historical uses of geothermal energy, the current geothermal industry arose in the 1950’s and now comprises four segments: high, moderate and low temperature sectors plus a regulatory sector.

The high temperature sector develops geothermal resources for electricity generation and industrial heat processing. Participants in this market include relatively large operator/developers, equipment manufacturers/suppliers, and large construction contractors. In contrast, the moderate temperature sector uses low grade geothermal heat for small-scale, residential and commercial applications such as bathing, space heating and water heating. The insulate sector uses the thermal properties of the earth or ground and surface waters to store and transfer heat via heat pumps for residential and commercial customers. The regulatory sector maintains order in the issuance of extraction permits and environmental protection.

On a primary energy basis (i.e. before energy conversion losses), geothermal is the largest indigenous energy source in New Zealand, exceeding oil and gas as well as coal.

New Zealand resides on an active plate boundary and contains 129 conductive and convective thermal systems resulting from high crustal heat flows. The 15 high-temperature convection systems in the North Island are thought to result from bodies of magma ponding in the upper 10 km of the crust. Elsewhere, the deep circulation of water along fractures creates the hot springs distributed on both the North and South Islands. 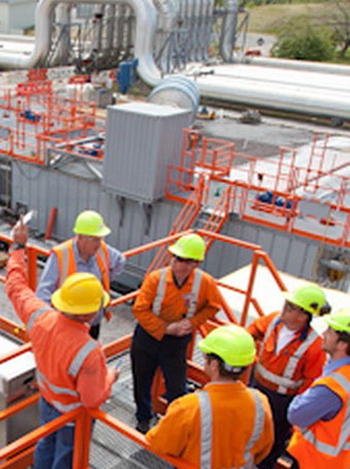 Geothermal energy competes directly with wind and solar PV technologies. There are no government subsidies or feed-in tariffs to support renewable investments; all energy sources compete on a level tax and price playing field. Greenhouse emissions are managed through an emissions trading scheme which sets the price of carbon discharged to the atmosphere. This charge applies equally to all forms of generation.

The Role of the NZGA

To this day, the NZGA remains an independent, nongovernmental, non-political and not-for-profit organisation providing information, connections and facilitations to support the use of geothermal energy in New Zealand. The main activities this year include organising a NZ pavilion at the World Geothermal Congress, an annual industry seminar, a quarterly newsletter, a web and social media site, and submissions to government agencies.

The NZGA comprises almost 200 subscriber members, 26 student members, and 25 sponsor companies and institutions. Sponsorships are tiered into gold, silver and bronze categories. Members provide most of the effort supporting NZGA activities; an elected Board of 22 oversees the annual programme and budget.

InterContinental Melbourne The Rialto – A passion for the past

InterContinental Melbourne The Rialto – A passion for...