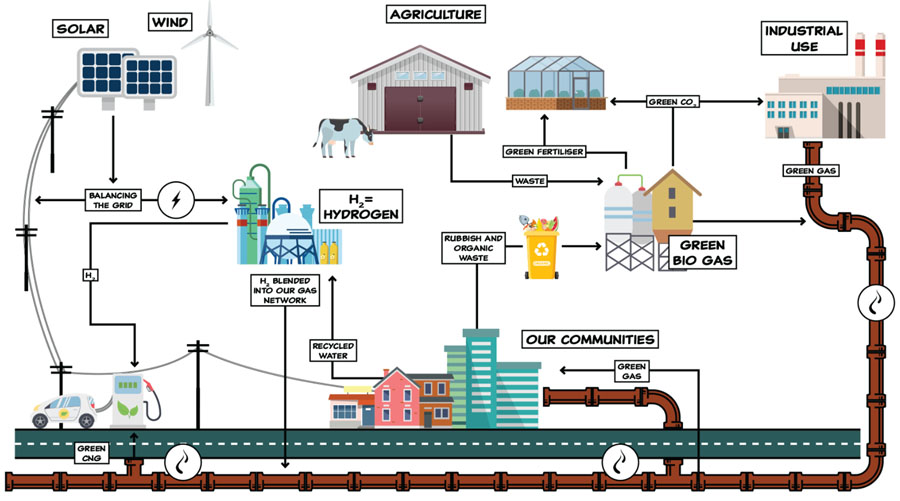 Leading energy infrastructure company, Jemena, is calling for a Renewable Gas Target at this year’s Australian Energy Week as a crucial next step towards achieving net-zero emissions in Australia by 2050.

Jemena’s Managing Director, Frank Tudor, said a Renewable Gas Target would likely replicate the success of the Renewable Energy Target (RET) which helped to spur the development of renewable technologies in the electricity sector. “This is the jump-start the gas sector needs to truly commercialise zero-emission gases such as hydrogen and biomethane and make them available to Australian homes and businesses at scale,” said Mr Tudor.

“By decarbonising our existing gas infrastructure, we can avoid unnecessarily building new alternative forms of energy infrastructure, which will have a significant impact on customer bills. In the short-term this will make the transition to a low-carbon future seamless and means Australian homes and businesses can continue to use their gas stoves, heaters, and other appliances. From 2050, conservative estimates suggest Australian energy consumers can save anywhere between $12 to $14 billion per annum by simply utilising existing gas infrastructure to decarbonise our economy.”

Mr Tudor said a subsidy in the order of $3-15/GJ could facilitate the entry of significant amounts of renewable gas into Australia’s gas networks, and is much less than the subsidy offered under the RET to the electricity sector, which was the equivalent of $22/GJ.

“We believe a Renewable Gas Target could see up to 9PJs of zero-carbon gas injected into Jemena’s New South Wales gas distribution network by 2030. This would remove around 464,000 tonnes of carbon from the atmosphere each year, the equivalent of over 200,000 cars, and help New South Wales achieve a 10% renewable gas target. Our initial analysis has found that this can be done at an estimated cost of around $15 for a typical NSW household.

“A Renewable Gas Target will also give confidence to those hard to abate sectors – such as the manufacturing sector – which rely on gas as a fuel stock, that they will be able to continue operating in Australia while decarbonising their supply chains. Renewable gases can also be used in the transport sector, particularly by larger vehicles such as buses and haulage vehicles. At the same time, we believe renewable gas will also provide firming power to intermittent renewable generation, particularly as hydrogen-fuelled power stations are developed.”

Jemena’s call for a Renewable Gas Target follow the company’s call for a Green Gas Certification Scheme which would enable customers to purchase verified green gas from their energy retailers in the same way they purchase renewable electricity.

Jemena is currently investing over $30 million in partnership with the Australian Renewable Energy Agency (ARENA) in projects designed to test the application of hydrogen and biomethane in residential, transport, storage, and commercial settings. For more information about Jemena’s renewable gas projects visit: https://jemena.com.au/about/innovation/renewable-gas

Jemena is an $11.5 billion company that owns and manages some of Australia’s most significant gas and electricity assets. These include:

Jemena also part-owns the ActewAGL electricity and gas distribution networks in the ACT and United Energy, which supplies electricity to more than 600,000 customers across south-eastern Melbourne and the Mornington Peninsula.