Tatiara, or “The Good Country”, is located in the Limestone Coast region of South Australia, covering an area of 6,525 square km. Fortuned with a rich rural region and an abundance of good underground water, the region has developed some excellent facilities while the unemployment rate has also been kept at very low rates. The district’s population of 6,700 is scattered around 5 towns which include 1,900 km of roads, three airstrips, four cemeteries, four effluent drainage schemes, two waste transfer stations, and a number of other assets.

The Tatiara District Council is headed by CEO Robert Harkness, a former District Engineer, who has been leading the management team since 2002. On his side are Corporate & Community Services Manager Kingsley Green, who has been with the Council for 10 years, Manager of Development & Inspectorial Services Rocky Callisto, a member of the council for 19 years, and Manager of Technical Services Surya Prakash who recently joined the team. Together Council and the management team are constantly working on improving the facilities and services offered to the region’s residents and they have undertaken some very ambitious projects in order to achieve that.

Maintaining a vast network of roads and streets

First of all, a huge chunk of the council’s time and resources goes into the construction and maintenance of the roads and streets network. The council’s $15.8 million budget, which is 65 percent funded by rate revenue and 25 percent by government grants, largely goes into making sure that the region’s roads adhere to some very specific and strict standards. For instance, upgrading Emu Flat Road was a five-year plan with an estimated cost of $4,512,073. As a major route which services a lot of farmers on the northern part of the district, the road also acts as a detour whenever there’s a major issue on the main Adelaide to Melbourne highway. As such, the council felt that it was vital to provide proper infrastructure for the drivers, an undertaking which was aided by Special Local Road grant funding.

The impact was immediately positive. The upgraded and wider road instantly made conditions safer for the drivers of the mix of vehicles that regularly use the road. They include large b-double trucks, school buses, farm machinery and passenger vehicles. Another example of the council’s work on the road network are the intersection upgrades at Wolseley, Mundulla, and Bordertown. After several safety and access issues were identified at each intersection, the council worked hard to virtually eliminate them in order to make them safe and convenient for the residents. Yet another example can be identified in the Winter Road Bridge upgrade. After an engineer’s report highlighted that the bridge was structurally unsound for heavy truck traffic, the council replaced the bridge with help from the Federal Government’s Bridges Renewal Program.

Because of the district’s relatively low population, the council can directly address the problems of most of its residents. For instance, a fair percentage of the councilors are from the farming community and that industry is highly important for the council as a whole. In fact, a considerable portion of the road upgrades are completed precisely in order to service the farming community, whether it is by providing better access to storage facilities or allowing farmers to use their vehicles with greater ease. As such, it is no wonder that such a large percentage of the budget is allocated to the maintenance and upgrade of the road infrastructure.

Improving the community with value-added projects

Of course, roads are not the only thing that the Tatiara District Council concerns itself with. Every single public facility located in the region is somehow connected with the council, especially where the community is directly involved. The management team of four members prepares reports for the council, recommendations as to the best courses of action, and information. Though the council has final say and can always accept, amend, or outright refuse the plans proposed the by management, it’s up to the team to provide information. Furthermore, it’s their responsibility to create all sorts of plans including financial and strategic ones. Finally, managing the staff and dealing with employment issues also takes a portion of the team’s time.

Being a relatively small council in a tight-knit community, the team’s decisions always have a direct and immediate effect on the population. The most relevant example of this is the Bordertown Civic Centre Redevelopment project. Back in the mid-2000s, providing equitable disability access was very high on the council’s list of priorities and a major issue for the team. At first, the council wanted to integrate the whole building to be more accessible so that every member of the community could take advantage of the existing facilities. Instead of focusing just on that issue, however, the council decided to get some advice from architectural firms in order to redevelop the entire building.

Soon after, a plan was set in motion. This included maximizing the floor area of the library, providing disability access, developing a state-of-the-art art gallery, maximizing the utilization of existing buildings and infrastructure to minimize costs, develop designs that could integrate the existing council chamber and the heritage-listed hall building and finally, to minimize energy and maintenance costs in the new facility. The project’s cost was estimated at $4.5 million which was somewhat controversial with the community. Once it was completed, however, the community’s response was overwhelmingly positive and it was viewed as a well-done project.

“The community has started to see that there’s enormous opportunity to undertake community events and activities. As for the level of engagement with all layers of the community, before there was apathy or antipathy about the benefits of the centre but the more they’ve used it, the more they’ve embraced it for a number of reasons. They’ve started to realize it’s a significant community asset”, says Kingsley.

A cultural and community centre

After all, there are now countless community events being organized and taking place in the new civic centre. The digitized cinema has seen 230 screenings in the last 20 months alone while the facilities of the centre are being used for a wide variety of purposes. There’s theater from local groups, a library which attract loads of visitors, and a specialized area that hosts weddings and funerals. Furthermore, the Visitor Information centre has been moved to the new facility as it is more easily accessible to the community. Overall, the Civic Centre attracts an estimated 65,000 visitors annually, an impressive number considering the community’s population.

“It’s a broad community centre, it’s not just about events of a mainstream type. We are trying to engage with the community as they are coming in and using the facility. We’ve been able to engage in all sorts of cultural events and also been able to use the gallery to attract different groups of people and explore other cultures. We’ve also been able to have a range of forums that deal with mental health, road safety initiatives, life education, cyber safety. We’ve made sure it’s not just a community but also an information centre that provides something to all of the community”, suggests Kingsley.

As the team explains it, the Tatiara Civic Centre has basically become a community and cultural centre since its completion last year. Furthermore, Bordertown is quite proud to be the birthplace of former Prime Minister Bob Hawke and have made several efforts to honor his contributions to Australia. The shining example is, of course, the Bob Hawke Gallery which is housed in the Civic Centre. The facility was designed as both a tourism destination and as a place of education and historical interest so the council wants to keep exhibits going at all times. Planned initiatives include partnerships with the Bob Hawke Ministerial Museum and the University of South Australia in order to rotate the collection of exhibits in the Gallery and possibly host events there too.

The community’s work has received recognition on a state level as well. The Country Arts South Australia initiative has acknowledged Tatiara’s flourishing art community and the Minister for Arts recently announced that the District Council and the Country Arts program would be entering into a 3-year relationship that aims to support the arts in the south east of South Australia.

The council still has a lot of projects to complete, plans to draft, and things to accomplish. The team aspires to continue the region’s growth by venturing into the next stage in the industrial phase and supporting other types of business in the area to help sustain that growth. The residents of Tatiara will continue to benefit from the council’s many programs and hopefully the community will strengthen as a result too.

WHAT: The District Council governs several areas in eastern South Australia with Bordertown being the council’s seat 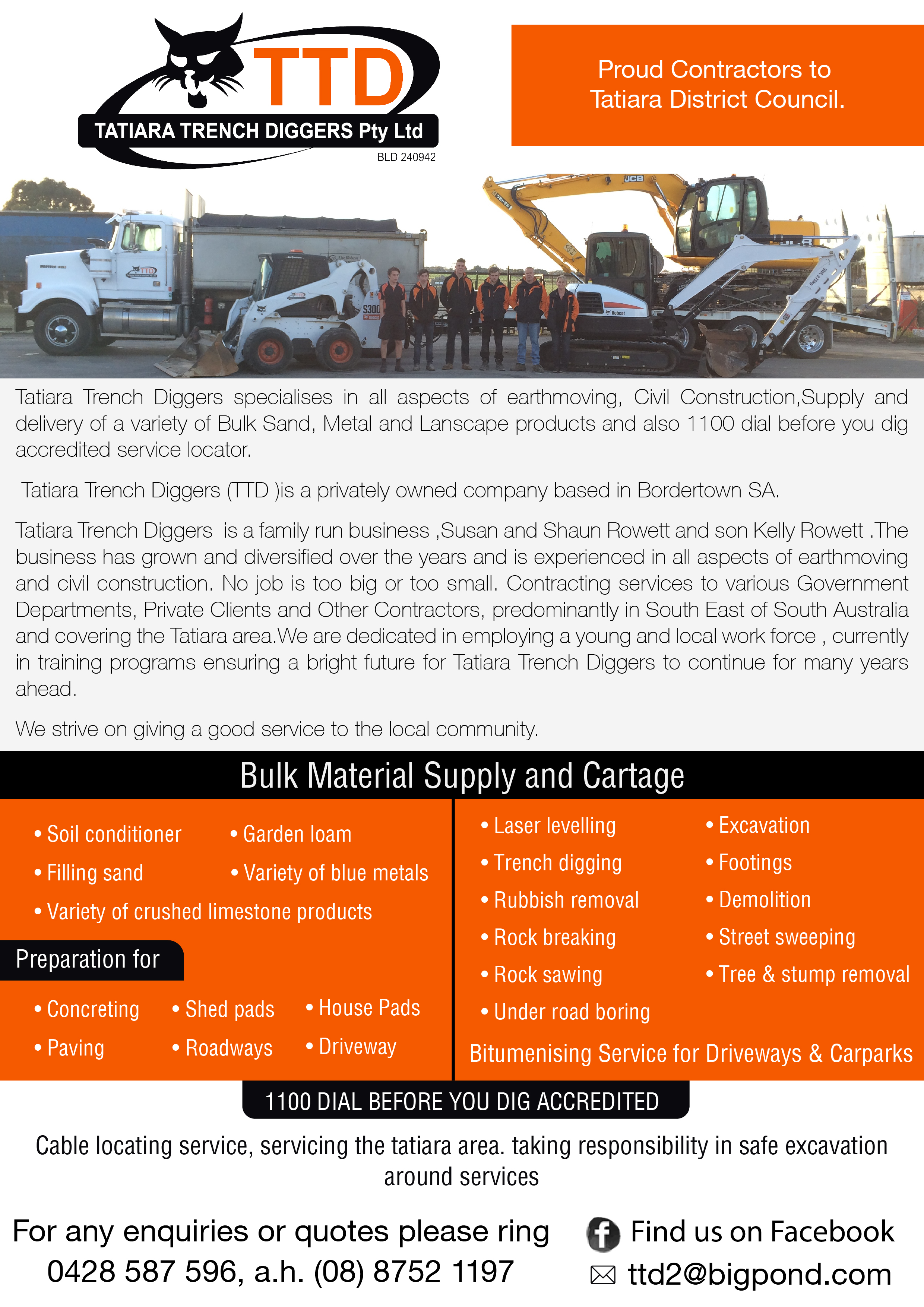 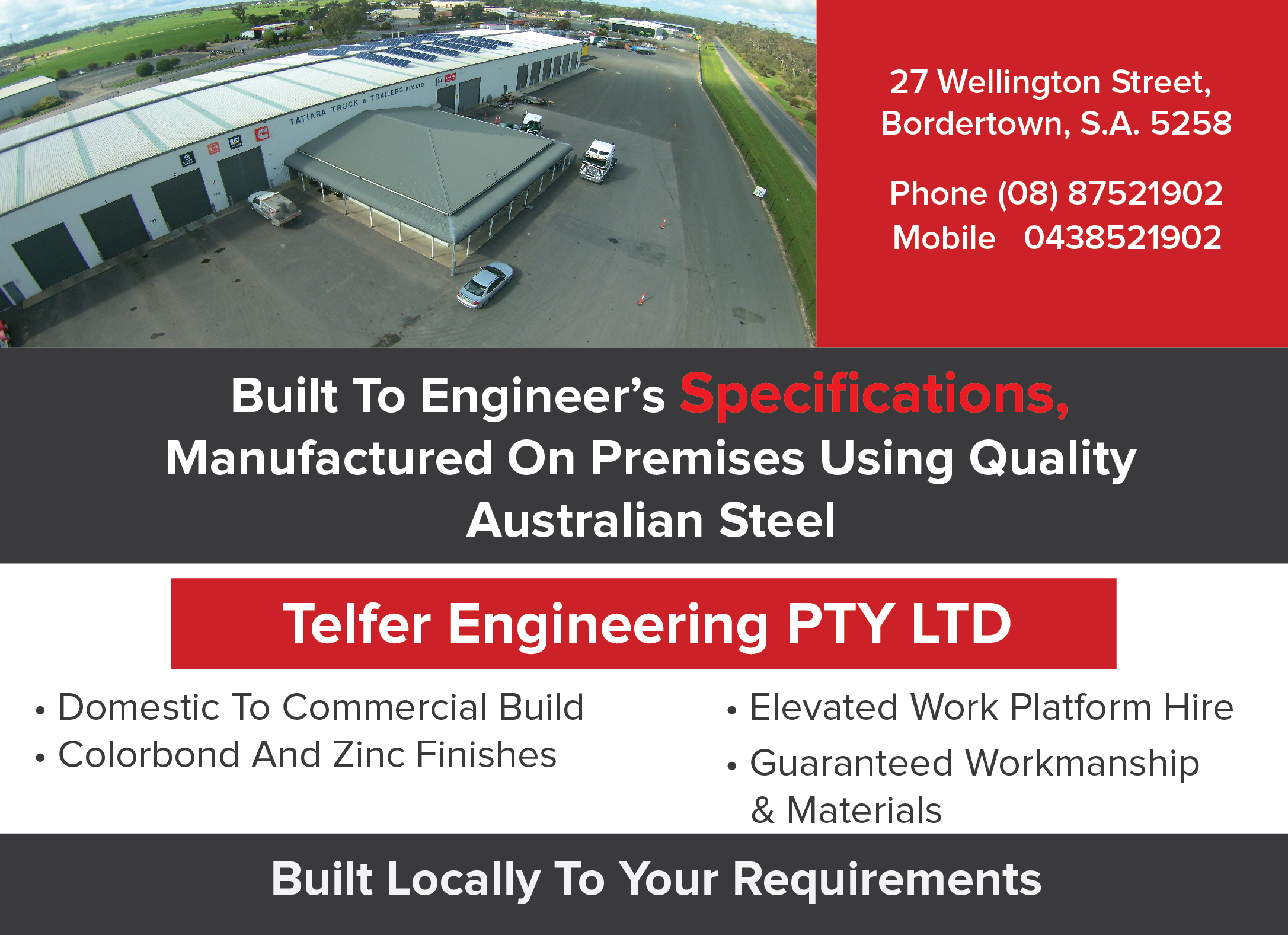 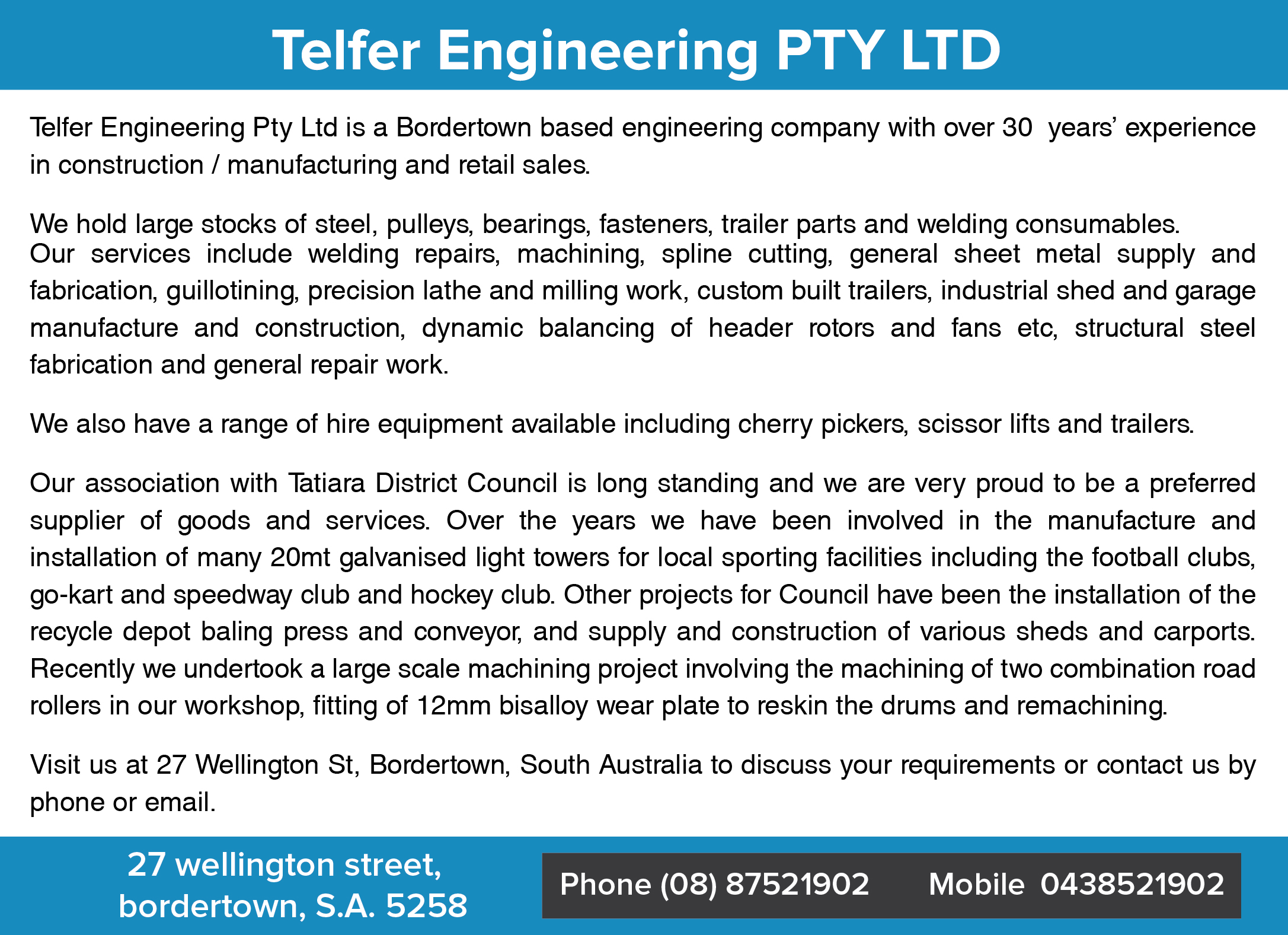 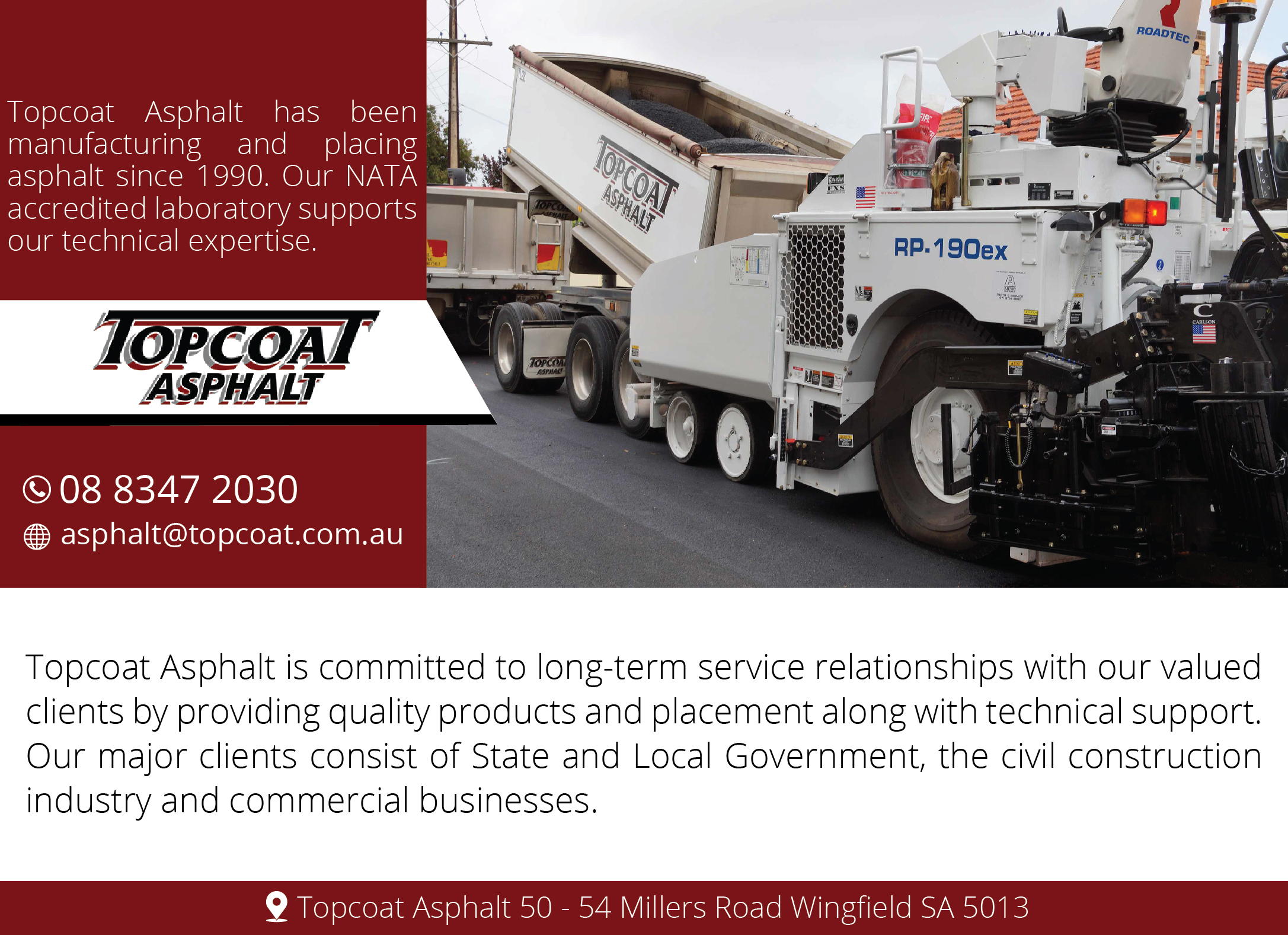 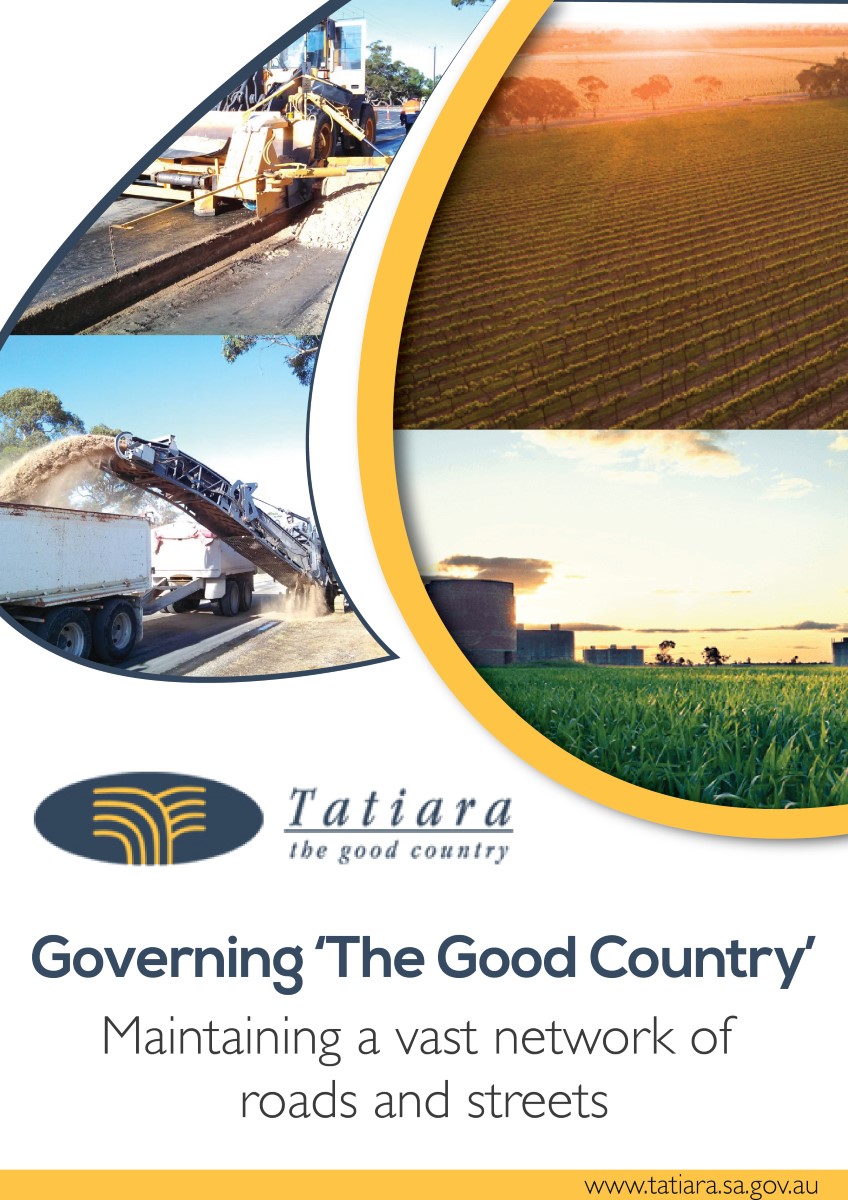