The power of clean energy and innovation

WestWind Energy has a vision to use clean energy and innovation to bring light to people’s lives. Established in 2004 and headquartered in Gisborne, Victoria, WestWind Energy Pty Ltd is dedicated to the development, construction, operation and management of wind farms and other renewable energy projects in Australia. WestWind Energy is part of the WestWind Group of companies based in Kirchdorf, Germany that launched with the establishment of the Wind Park Lemke project in Marklohe, Germany in 1999. Today, well over 300MW of wind energy projects have been delivered by the WestWind Group in Germany and most of them are operated under the company’s management.

In Australia, WestWind Energy’s mission is to drive change towards a sustainable energy future for the planet through development of cost effective renewable energy generation and storage solutions refined through technical excellence, commitment to communities and cohesive company values. The WestWind organisation holds a high regard for nature and is committed to enhancing the environment. They believe in building and creating a diverse team that are supportive of each other’s efforts, loyal to one another, and respect each other. Team members think big, have fun, and feel proud of the work they do.

Wind energy is growing as an industry sector and having the ear of the government is important. In that regard, Tobias Geiger, Managing Director of WestWind Energy, explains, “We advocate as a company on behalf of wind energy but we’re also members of various industry associations and not-for-profit bodies such as the Australian Wind Alliance. We do lobby work through both channels. We find often the decision makers in government departments very much appreciate direct contact with people that employ people on the ground and develop projects on their own, rather than just advocacy bodies. They want to hear directly from the companies that are driving it.”

In terms of development and planning, WestWind Energy does those key functions inhouse but also outsources much of the specialised work to expert consultants. In Australia, government departments prefer that a lot of environmental and other studies are conducted by independent experts. The WestWind role involves managing those independent consultants. But the company’s bread and butter is identifying suitable locations for wind energy projects and then securing land access and rights to develop projects.

“Liaising directly with landholders is one of those core functions that we will not outsource,” says Geiger. “Because the landholders want to know who they’re talking to and that those people are also the ones who make the decisions. So one of the important functions to keep inhouse is your relationship building with your key stakeholders. The landholders are predominantly farmers, mostly family businesses, although we do have some corporate farmers as well. If we get contacted by a landholder we do a quick desktop assessment of where that land is and what the potential is for a wind project on that land. If we think at a desktop level that it has merit, we endeavour to meet with the farmer in person to talk about the development process, how we work, and if there’s still interest we then work through contractual arrangements with the farmer and start the development process. This often requires the neighbours of that farmer as well because usually one landholding is not large enough for a windfarm, so we need a group of landholders to work with.”

Initially, WestWind Energy enters into an Option to Lease agreement with the farmer that basically says if all the studies indicate there is a viable project there, and the company gets permission to build a project, that the farmer would enter into a lease agreement. WestWind would lease the land for an agreed term, typically 25 years with extension options to 35 years. In terms of land use, the impact is very small. Infrastructure usually takes up one to two percent of the land, predominantly with access track to get to the turbines. Often those tracks are aligned with existing farm tracks or farmers are allowed to use the WestWind tracks that then become part of the farming operation. 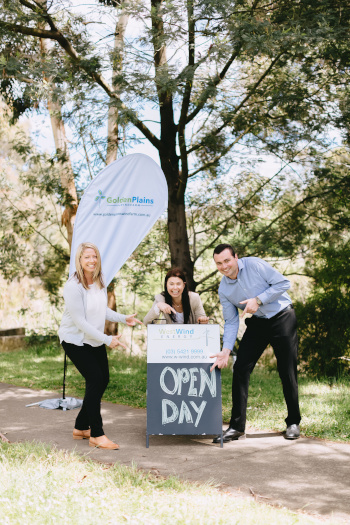 According to Geiger, “It doesn’t make sense for us to purchase the land for a wind farm. In a solar development, that’s quite different because it covers a lot more land area and also that land cannot be used for cropping anymore. So, often the solar developer would purchase the land rather than lease.” Marla Brauer, WestWind Energy COO, adds, “With regard to environmental issues, landholders that have been involved in our sort of projects feel very strongly that it is a very tangible, sizeable contribution that they’re making in a positive way toward counteracting climate change.”

All of the WestWind Energy wind farms are connected to the national electricity grid. That is part of the land selection process – to identify the location of the nearest national electricity grid connection. If a parcel of land is close enough to the transmission infrastructure, then WestWind would aim to connect into that infrastructure and sell the electricity on the electricity market. “It’s important in our industry to have a business model that grows with the industry and the market demands,” says Geiger. “There is an increasing inflow of financial investors in the renewable energy space and unlike a utility, those investors don’t have the people on the ground to actually manage and operate those projects. So they’re quite keen to work in a partnership with the original developer who takes on that ongoing stakeholder management. What has changed and affects our business model is that the financiers prefer developers to stay in the project and retain skin in the game in the long term but also support the ongoing project management. So we’re now catering more to that client base away from the utilities and more towards financial investors in this space who really want the developer in for the life of the project.”

Asset management is done typically by the wind turbine manufacturer. A developer of renewable energy projects such as WestWind signs a long-term maintenance agreement whereby the manufacturer maintains the turbines for them. The role of WestWind is making sure that the maintenance regime is followed and that the turbines are sound; engaging independent experts to check on the health of the turbines, check the documentation, but the actual work is done by the specialists – usually the turbine suppliers. All the major turbine suppliers around the globe have sales offices in Australia and that includes a project management team so they have people on the ground.

Forging strong relationships is a big part of the growth and success of WestWind Energy and they value each and every one. Of particular note: Mondo, the unregulated transmission services arm of Ausnet Services (licenced owner and operator of the electricity transmission network in the State of Victoria). Also, HWL Ebsworth Lawyers, corporate lawyer and long-term partner. On the tech front, greenmatch AG is a great partner of WestWind, providing valuable solutions in the area of renewable energy finance software & consulting. In addition, Coverforce Insurance Brokering, Australia’s largest privately owned insurance broker, works closely with WestWind to protect their business interests in the renewable energy sector.

Overall, the secret to WestWind Energy’s success is that it is highly experienced with a great deal of expertise but remains small and nimble. Brauer shares, “We are small, ethical and punch way above our weight as an organisation, developing one of the largest projects in the southern hemisphere. We accomplish so much because we have a fantastic team of dedicated professionals that are really engaged and passionate about the cause of what we’re doing.”

Erin Gray, Head of Business Admin & Engagement for WestWind Energy, chimes in on the company’s community involvement perspective. “I work in the engagement area and we spend a lot of time staying very connected to the communities in which we work. We don’t have a one size fits all approach to our projects and the communities around them, we spend a lot of time genuinely understanding what’s important to them. To make sure our projects benefit the local communities as far as possible. That really matters to us.”

What: Dedicated to development, construction, operation and management of wind farms and other renewable energy projects

With greenmatch you can structure, monitor and transact your renewable energy projects in a reliable and efficient way. The greenmatch software enables you to map the entire life cycle of your projects in wind energy, photovoltaics, hydropower and biomass. Our experts for project finance and investments advise you worldwide. Greenmatch offers the ideal solution for each market player.

As Australia’s largest privately owned insurance broker, we care about delivering great insurance solutions that genuinely protect the interests of Australian businesses across the renewable energy sector. Our dedicated team of advisors deliver first-class customer service and professional risk advice, helping you find the insurance you need at the right price.

Power Question – What is your top objective...