Grey District sits at the heart of the West Coast, stretching from the south banks of the Punakaiki River in the north, SE to Mt Anderson, N to The Pinnacle SE to Craigeburn in a SE direction to Mt Barron, SW to Jacksons and following the Taramakau River to the Tasman Sea. Steeped in rich history and character, the municipality covers Greymouth, Runanga, Blackball, Moana, Cobden and several settlements along the beautiful Grey River. Along with being the largest town on the West Coast, Greymouth also serves as the commercial centre of the region and is home to 27 percent of the District’s population of 30,000.

Grey District Community Development Manager, Dearne Thompson, reports “We’re not really expecting any population growth, which makes it quite hard in terms of paying for things we want to do. And also we have a lot of Department of Conservation (DOC) land, which is unrateable. The West Coast has a higher proportion of DOC land compared to other regions.” Yet, while it may not have significant growth in the forecast, what Grey District does have is a rather impressive vision for the Greymouth Central Business District. 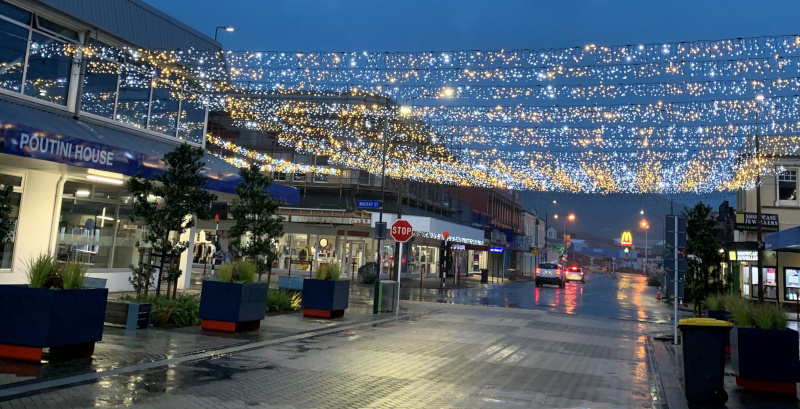 Back in 2015, the District created a CBD Renewal Plan in two stages. The first step was asking the community what they wanted. Then they were asked to prioritize the actions they gave. The top request to come out of it was for the Town Square and Tainui Shared Street. That was completed in December 2017 as a shared space for the whole community – locals and visitors –to gather and be encouraged to spend more time, and money, in town. The project has been a great success. The Shared Street has held 15 events since Dec. 2018 and is a popular spot. Thompson notes, “The CBD Redevelopment is really good in the sense that we have improved relationships with all the stakeholders working together, which we haven’t had at this level before. Now we’re working on an action plan of where we go next because the community is at the stage where we’ve done all the planning but now they want us to put something concrete up.”

One of the biggest issues is that much of the land in the CBD is leasehold. People who own a building and want to potentially lease it out to other tenants find that because it’s leasehold land they don’t have a lot of borrowing power. And some of these buildings need significant work to upgrade them to earthquake-prone building standards. As a result, there are shops sitting empty. The short-term focus is simply trying to tidy the town up. Have people take pride in their buildings – give them a lick of paint, get rid of the cobwebs, repair the wood, just make the area look a bit nicer.

The town did receive some grant money from the Provincial Growth Fund for a Greymouth Master Plan. Part of that included drawing up a CBD Redevelopment Plan, which built on the original work done back in 2015. In that plan is a more condensed version of the CBD. To account for the fact that there aren’t as many shops, they are going to be smaller and consolidated in a welcoming space that people want to travel around in and actually visit. The CBD, itself, is a very walkable area and the speed limit was recently lowered to 30 km to make it more pedestrian-friendly and better for shoppers. There is no residential there, as such, but that has been identified in the CBD Plan; adding mixed-use commercial and residential development to bring vibrancy and attract people into the town. Because Grey District is the centre of the West Coast, they have a lot of travellers, so there is definitely room to build more accommodation to cater to the hospitality sector.

Most of the District’s residents live and work in Greymouth. After the Pike River Mine disaster in 2010, the community lost many high-paying jobs that were based at that mine and others that closed in the aftermath. It had a huge impact on the economy and a large number of families were affected. Today, many of those people are working in the service or hospitality industries. Greymouth Hospital is a major employer and they’re building a new facility – an integrated family health centre with doctors, physio and chemists all in one location. “Our economic driver used to be mainly extracted minerals,” says Thompson. “There’s still some of that, but we’re definitely moving more towards engineering, service industries, tourism, and hospitality. Also we’ve got UFB (Ultra Fast Broadband) in the District, so it gives quite a lot of opportunity for people to come and live here for the lifestyle, but then also do work for other places from here.”

With the impetus on getting more greenery into the CBD, “rewilding” is a key part of the Redevelopment Plan, going forward, in keeping with a theme that was done in the Town Square. The town is also looking at a living wall and thinking about the government’s push for zero carbon, zero waste; how they can contribute towards caring for the environment. “And we’re working on a pedestrian access up to the flood wall,” says Thompson. “It’s a massive cement flood wall that runs beside the Grey River and protects the town. The last flood was in 1988 and the wall was put up after that. It has been raised twice and with climate change, it may need to be raised again.”

On the recreational front, Grey District is celebrating the opening of the Paparoa Track which starts out of Blackball and is the 10th Great Walk in New Zealand. The path is a 55 km, three-day walk and tramp or two days by mountain bike. An exciting and much anticipated boost for the local economy. Greymouth also has the Westland Recreation Centre, a well-used community hub with basketball courts and aquatic facilities. And work is underway on the West Coast Sports Places and Spaces strategy to define what is available and what is needed in sports facilities. With an aging demographic and volunteers getting older, the community needs to address how to get more interest from young people.

Given the growing senior population, retirement housing is also on the agenda. Grey District Council has 118 retirement housing units and around 65 people on a first priority waiting list; some have been on it for two years. On the whole, the real estate market is buoyant, homes are selling quickly, and a lot of people from outside the district are moving in. And that’s purely for the house prices, which average about $270,000 – compared with Auckland, Grey District is quite affordable. There is a large stock of older houses and a lack of rentals, which has a lot to do with the Healthy Home standards. Houses must meet certain regulations with regards to insulation, heating and ventilation and that’s beyond what many owners can afford. And they have to disclose it if the building doesn’t meet the standards for rental.

Speaking to what’s next for Grey District, Thompson states, “That will be the action plan looking at rewilding, adding vibrancy to the CBD and beautifying it. And we’re working on getting our retirement houses up to scratch in compliance with the next phase of Healthy Home standards to meet the demand. We want to make sure we have nice units for our elderly. Looking after our elderly is definitely going to be a focus. We’re also deeply interested in climate change and how we’re going to deal with it… our coastal areas are facing more and more severe weather events that are causing quite a bit of chaos. That will be a joint effort between us and the West Coast Regional Council.”

Grey District Mayor, Tania Gibson, shares her own comments on the bright future ahead for Greymouth: “In the next few years we are going to see some exciting changes in our Central Business District with the implementation of the CBD Redevelopment Plan. Council has been working in collaboration with Māwhera Incorporation, Greymouth Business & Promotions Association and Development West Coast to implement these changes. The earthquake-prone buildings standards will affect the way our town looks. There is a need for buildings to be made smaller and have more shared spaces. I am looking forward to seeing a CBD that is well used by visitors and our community alike, coming together and holding events to create vibrancy in town.”