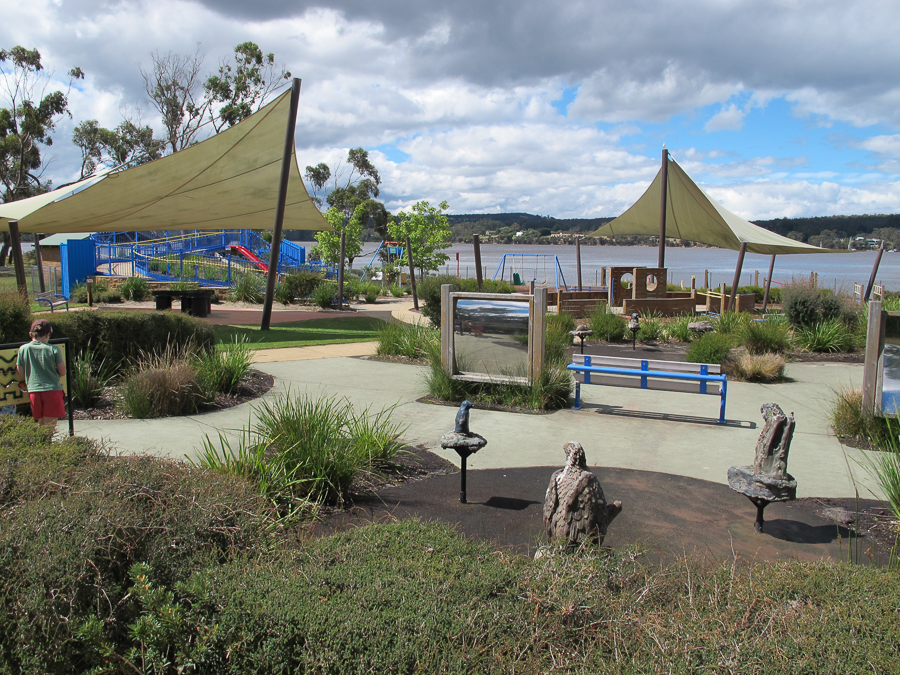 The municipal area of Kingborough Council is located just south of Hobart and covers 717 square kilometres.  Kingston is its commercial, retail and administrative centre and the Council area includes Bruny Island. Kingborough had a population of about 34,000 in 2011 according to the Australian Census. The largest number of inhabitants resides in the Kingston/Blackmans Bay area.

The population in the municipality has a high growth rate with the Census records showing that between 2006 and 2011 the number of residents in Kingborough grew by 9%. The comparable figures for Tasmania and Australia as a whole are 4% and 8.3% respectively. The growth in population in Kingborough is the largest of any local government area in Tasmania. 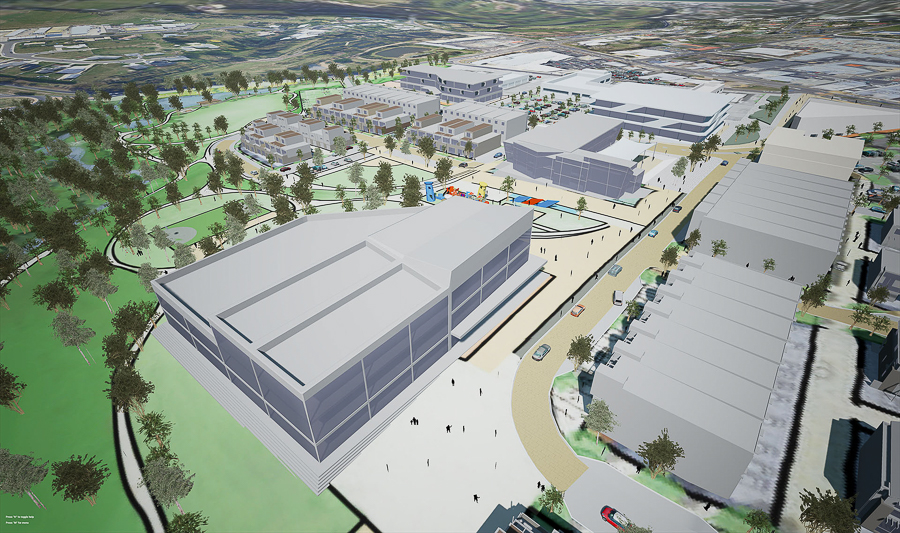 Council has done a commendable job in catering to the requirements of the growing community and many of its programmes are in direct response to the increased demand for infrastructure and other facilities. The rapidly growing population puts a strain on its resources but Council has risen to this challenge and initiated a number of projects that have resulted in making Kingborough the first choice of many home-seekers.

The Mayor of Kingborough, Cr Steve Wass has successfully steered Council in achieving many of its goals and encourages a can-do attitude within the organisation which has enabled it to take up a number of ambitious projects. He says, “It has been a rewarding year as my first year as Mayor and I am excited by the new developments and initiatives happening in Kingborough.

“Our community continues to expand and is projected to grow by a further 40 percent over the next two decades, which is the strongest population growth in Tasmania. I am confident the future of Kingborough is bright as we have one of the strongest footholds of any Tasmanian Council when it comes to community service delivery and business partnerships.

“The building blocks are in place and we have the people, the ideas, the service platform and the desire to embrace our challenges and turn them into opportunities.” 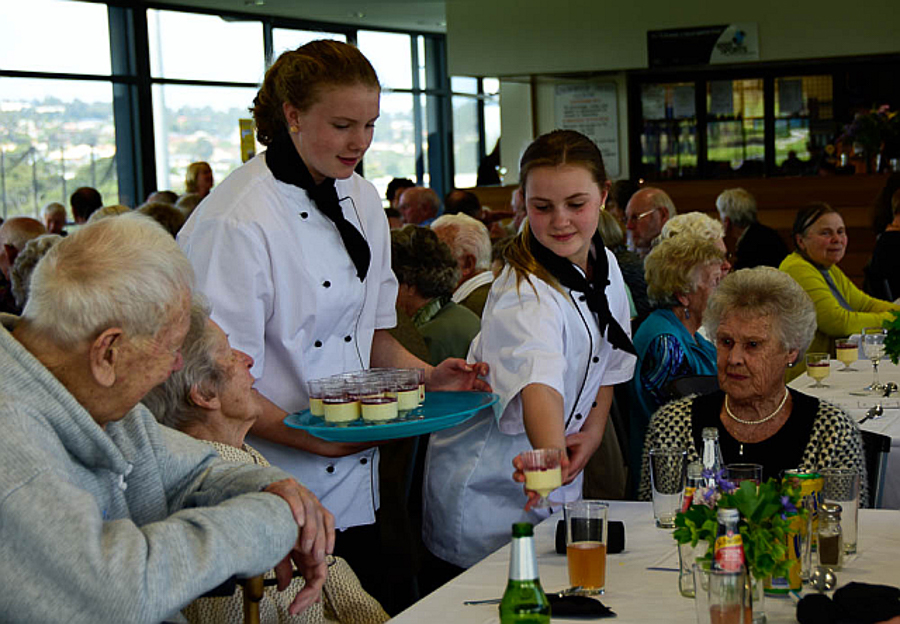 There are a number of industries in the Kingborough Council area with fish processing, tourism and civil engineering being the most prevalent. The activities practised on a smaller level include sawmilling, quarrying, building and joinery.

Kingborough also houses Australia’s headquarters for the Australian Antarctic Division, as well as a dedicated fisheries and aquaculture centre at the Institute for Marine and Antarctic Studies. It is home to the Kingborough Sports Centre, the State Gymnastics Centre and the Twin Ovals and function centre.

Describing this project Tony Ferrier says, “Council is currently trying to upgrade the central business district through a number of projects and the most important one is the redevelopment of the former Kingston High School site. Council is in the process of purchasing that site from the government.”

The Kingston High School was formerly located at a site that is immediately adjoining Kingston’s central business district. The land is now vacant and available for development. The former school buildings have been demolished and it is proposed that the area will be converted into inner city residential housing and commercial units.

About 40% of the available space will be used for gardens and parks. A community health centre and a community hub will also be constructed. The project is an integral part of the CBD and Council is currently in the process of doing the traffic analysis and road design to provide it with better linkages.

The Kingston High School site is the most important development opportunity in Kingborough and its success will give a fillip to the whole Kingston CBD. Council has structured the project in a manner such that it supports further private investment within the rest of the central Kingston area rather than competes with it. 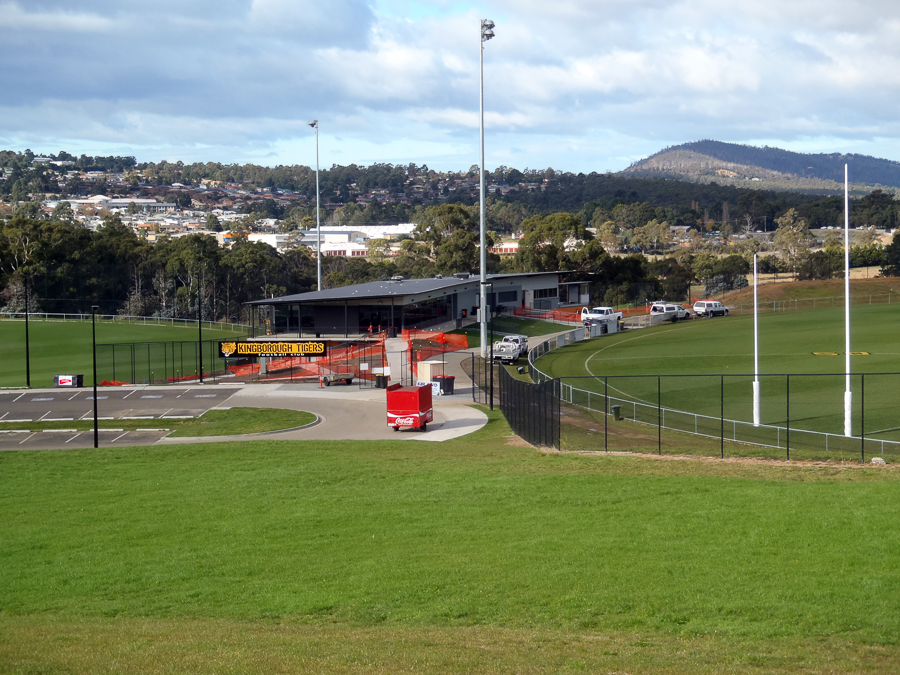 It has done this by ensuring that a number of additional community facilities such as public parks and health services are provided in the immediate vicinity. This will bring more residents and visitors into the area, resulting in greatly increasing the viability of local businesses.

It is estimated that once the Kingston High School site redevelopment project is completed it will help create about 600 new jobs for the local community. New business activity will result with an additional $80 million being injected into the local economy. In the 10 year construction period, a sum of $90 million will be expended for on-site development resulting in 70 jobs being created each year.

Referring to the Kingston High School site development project Mayor Steve Wass says, “Kingston has an important role to play as a key employment centre in Southern Tasmania and this development will secure increased job opportunities for our community going forward.

“The site will also incorporate significant components of public open space, which will add to the overall appeal for businesses, tourists and residents; it will be our heart and soul.”

“I am particularly thrilled by the architectural competition to design the Community Hub on the site. This competition is in accordance with the Australian Institute of Architects guidelines and will be open to architects Australia wide.”

David Reeve explained the importance of Kingston Beach to Kingborough Council and the steps that have been taken for its renewal, “It is a popular beach used by a variety of users. In 2005, there was a master plan that was developed, which looked at a vision for that area. It did not consider just the foreshore portion but looked at the whole Kingston Beach precinct.

“Council developed an overall vision that incorporated the buildings and businesses that we wanted to have along the beachfront and in its immediate vicinity. We put a great deal of emphasis on developing open spaces that would support all the varied uses for the area. We also analysed the current and future traffic demands and the car parking requirements.

“Landscaping and foreshore redevelopment has been key to supporting the vision for the area. Kingston Beach is a treasured location, important for not only the local people but also a large number of visitors who frequent it. We maintain the quality of the beach and enhance it to make it an enjoyable experience for all users. The design continues to be developed in consultation with the local community and other visitors and we will be reviewing our progress throughout the implementation of the plan.”

A fair amount of work has been completed on enhancing the beach foreshore itself and on the connecting roads. Council is now developing the remaining sections. Most of the financing for the work has been provided by Council itself although it did receive a recent grant from the state government that has helped facilitate a small part of the redevelopment.

About 40 years ago, Council purchased a large property and subsequently built a sports centre on it. At that time, it was a large investment and a substantial amount of debt had to be incurred for the acquisition of the land. The sports centre proved to be very popular with large numbers of local residents using its facilities.

With a number of other stadiums becoming available in Hobart, the sports centre’s popularity began to wane. About six years ago, Council received some grants and carried out extensive refurbishment. At the same time, the Kingston High School site was acquired and the school shifted to the Kingborough Sports Centre site.

Now there is a new High School adjacent to the sports centre. A new stadium has been constructed along with a gymnastics centre. Having the school located near the sports precinct is a great advantage as a number of facilities can be used both by students and the local residents. This has also helped finance the expansion of the sports centre.

The sports centre includes the “twin ovals”, one for cricket and the other for Australian rules football. These have been built to extremely high standards and a number of international-level players have remarked that the surface is one of the best that they have ever played on. A well-appointed Pavilion services both these grounds.

The facilities at the Kingborough Sports Centre include basketball, volleyball, squash, badminton, netball and table tennis. A fitness centre is also available with new and interactive machines and classes for all abilities. All the facilities are maintained in excellent condition and local residents use the sports centre extensively.

Kingborough Council has met with great success in meeting the demands of its rapidly growing population. The prospects of the area and its residents is best summed up by Mayor Steve Wass, “Kingborough is a vibrant and growing community, situated in the midst of a beautiful and natural environment with a peaceful lifestyle and expanding commercial centres, with strong services and facilities.

“The best interests of our community are the priority in evaluating our future and making sure that we continue to provide the best service for ratepayers.”

WHAT: Kingborough Council continues to expand and is projected to grow by a further 40 percent over the next two decades, which is the strongest population growth in Tasmania. 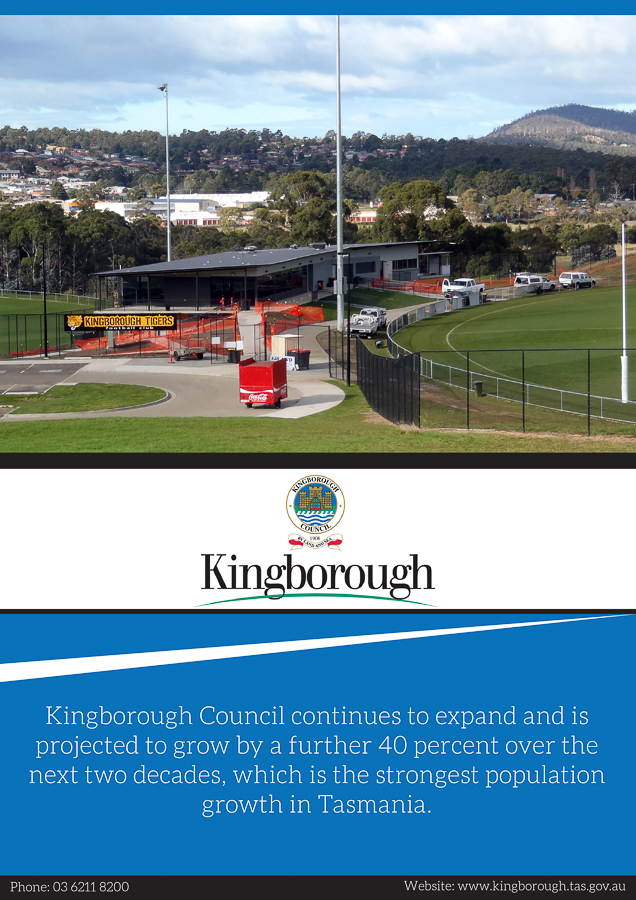