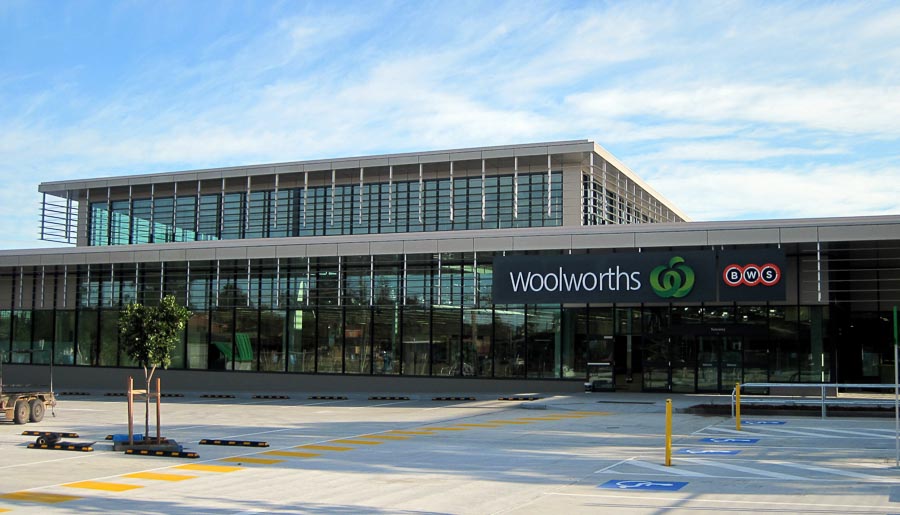 Meeting the Needs of  the Community

An area of 3300 square kilometres in the Mid North Coast region of New South Wales falls under the purview of Great Lakes Council. Located three and a half hours drive north of Sydney and about two hours drive north of Newcastle, this coastal community has a population of 35,000.

The area is known for its agriculture, aquaculture and tourism and the main population centre is around Forster-Tuncurry. The region has a very strong attraction for retirees with the result that demographically the population of Great Lakes Council is the third oldest in Australia.

Great Lakes Council has been doing an exemplary job in maintaining the infrastructure and facilities in its territory despite the resource constraints that it faces. Director Engineering Services, Ron Hartley says, “The Council has had a very strong focus for probably the last eight years on asset management. We made a really conscious decision that we wanted to address the issue of bridges and roads as fast as we could. We went through a process whereby we did a review and identified the areas where we could get some more money to help with our assets.

“We are at the limit of our borrowings and the only way that we could increase our rates was to go through a lengthy process with the State Government. The third option for us was to generate our own revenue and there were limited opportunities for that.

“So we went for a rate increase and got about half of what we wanted. We also went through a service level review process with the Council and the community where we looked at what businesses or services we should be in. Council did a review of our services and we actually got out of a few businesses and got back in some others. Any money that we saved through efficiencies was put into improving our systems, particularly information, communications and technology.

“The State Government also introduced the Local Infrastructure Renewal Scheme (LIRS) which subsidised Council loan borrowings for asset renewal so Council was able to borrow quite extensively at low interest rates. This enabled Council to bring forward a lot of infrastructure renewal that was going to be done over a 10 year period to a three year period.”

There are 150 bridges in Council’s territory, half of which are made of timber. There is also an extensive network of sealed and gravel roads which need to be regularly maintained and upgraded. A number of innovative steps have been taken to ensure that this infrastructure is in the best of condition.

An important project carried out by Council has been the Seal Rocks Road reconstruction. A 2.4 km section of the road has been upgraded and significant improvements have been made in the road width, alignment, and surfacing. The work done has greatly improved what used to be a narrow gravel road on poor alignment and significantly reduced Council’s maintenance costs on this road.

Another road project that has yielded great benefits to the community has been the reconstruction work undertaken on Macwood Road at Smiths Lake. This is an 800 metre stretch between The Lakes Way and Matthew Road and is the only access road to the village of Smiths Lake. The work entailed widening of the road, improvements to drainage and footpaths and reconstruction of the road pavement.

In addition to these roadworks Council has undertaken reconstruction work on Berkeley Street between Lamans Creek and Broadway Street at Stroud. Storm water drainage, kerb and gutter and footpath have been installed at selected locations and the road pavement has been reconstructed. This road is the main access to the town of Stroud and has greatly enhanced the appearance of Stroud.

Over the last 10 years Council has replaced about 40 timber bridges with concrete. As part of its bridge replacement plan, Council is currently in the process of replacing two bridges on Manning Hill Road, two bridges on Monkerai Road and one on Bombah Point Road.

Over the years Council has taken a number of measures to overcome the financial constraints that it faces. It has now reached a stage where it does not have any backlog of work regarding bridges. As far as roads are concerned, Council has developed a detailed asset management plan and is in the process of increasing rates by about 3%, which will yield an additional $1 million per year. This sum will be utilised towards road maintenance and reconstruction to ensure that roads continue to be improved to meet the expectations of the community.

After taking all these pre-emptive steps and following a policy of prudently managing its financial resources, Great Lakes Council will be one of the few Councils in New South Wales which does not have any backlog of roads and bridges. The main constraint that it has faced is the problem of rate capping which has been prevalent in New South Wales for the last 40 years. 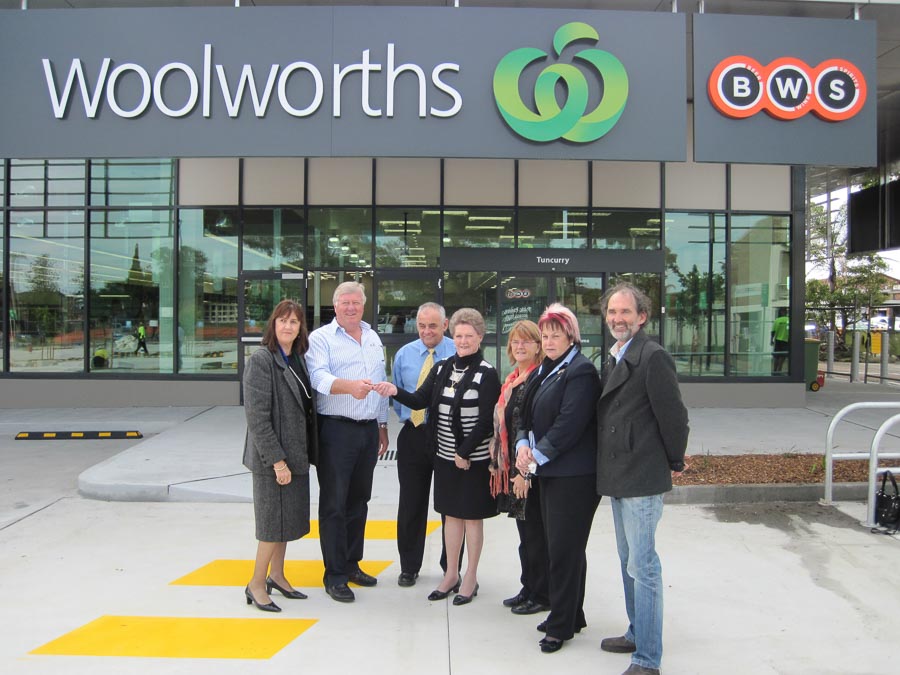 Another issue faced by many Councils, including Great Lakes Council, has been the demand from the community for a host of services that were traditionally not provided. Traditionally Council work was restricted to ‘roads, rates and rubbish’, but now there is a great demand for community services. This presents a dilemma to Councils across the state and has resulted in their gradual transformation.

Of course, Councils cannot neglect their basic functions and continue to provide and maintain infrastructure within their territories.
A project that will directly benefit Tea Gardens and Hawks Nest residents and the community at large, is the restoration of the Lower Myall River and the replenishment of Jimmys Beach. This project involves dredging approximately 100,000m3 of sand from the river entrance to replace the sand eroded from Jimmys beach. Council has been successful in attracting Federal and State Government funding for this work which entails an expenditure of $2.7 million. This project is an excellent example of the coordination between the Federal Government, which is contributing $750,000, and the State and Local Governments which are contributing a sum of $993,000 each.
Despite the shortage of resources, Great Lakes Council has taken a number of proactive steps to upgrade facilities. One such initiative is the supermarket project that was completed three years ago as part of the revitalisation of the township of Tuncurry. No speciality shops were permitted within the project because they already existed on Main Street. 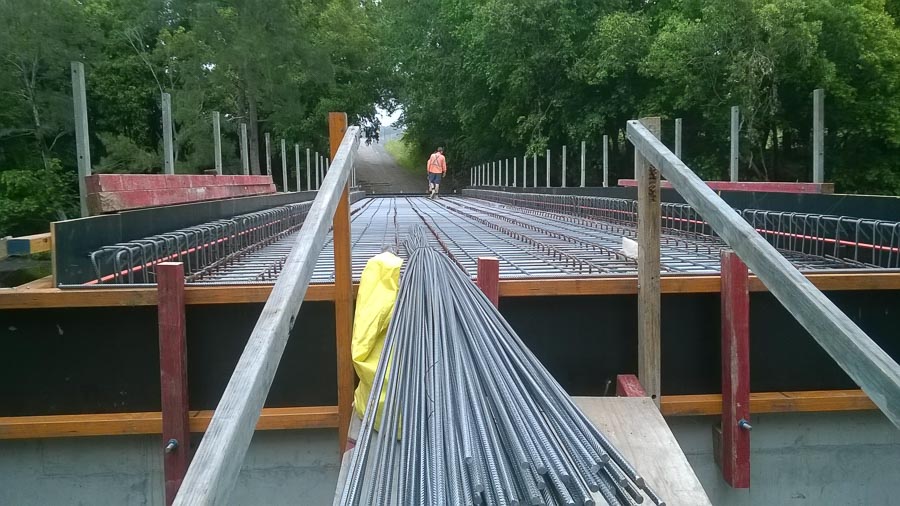 Council spent an extra $1.5 million on the design of the structure to ensure that it became a landmark in the area. The building was leased out to a supermarket chain. Council went through a process where it invited a number of bidders to rent the building which was proposed to be constructed.

After protracted negotiations it was decided to partner with Woolworths as they offered the best terms. The building was then designed in conjunction with them. A unique aspect of the project was that while the internal area of the building was at the disposal of Woolworths, the external part was constructed according to Council’s design.

The aesthetically designed building is located adjacent to the town centre and has become a focal point in the area. It is a major attraction for the people of Tuncurry and has also been a great financial success for Council and the local retail businesses. In fact, income from the development is helping to fund roadworks and other entrepreneurial activities of Council.
Speaking about the plans for the coming years, Council’s General Manager, Glenn Handford says, “In the next ten years we hope to eliminate our backlog of roads and improve our overall financial sustainability. We also hope to continue our environmental program and provide some aspirational services and facilities for our community.

“We will move away from being a Council that just looks after roads and rates and bridges to one that provides other community facilities. Over the last five years we could easily have put $10 million into building a new library or some other facility as many Councils in New South Wales have, but we have chosen to put all of that money into roads because we want to get rid of our backlog.

“Now we are at a stage, where because we have got our infrastructure well under control, we are starting to look at upgrading our other facilities by putting in more walkways and upgrading some of our aged community facilities.”

In the last year Council has bought several sites in the town centre of Forster. One of these sites measures about two hectares and it is planned to establish a library there. There is also a proposal to enter into a joint venture with a private sector company to put up a hundred to a hundred and fifty residential units. This will form part of the urban renewal and economic development initiative for the Forster town centre.

Great Lakes Council is one of the best-performing councils in New South Wales. It has done commendable work in maintaining and enhancing infrastructure despite the limited resources available. To its credit, it has been successful in implementing plans which not only fulfilled a long-required need, but also generated additional revenues.
In addition to this, it has several innovative projects to its credit. Council enjoys a unique advantage because of the large number of retirees in its territory who actively participate in volunteer work. This volunteer workforce, which numbers some 700 members, significantly reduces the drain on Council’s resources as well as maintains facilities to a much higher standard than Council funding would normally allow. The Great Lakes community is fortunate to have its needs met by the highly capable Council.

WHAT: A leader in the provision of infrastructure and services which sustain and enhance the natural environment and achieve a quality lifestyle for residents and visitors. 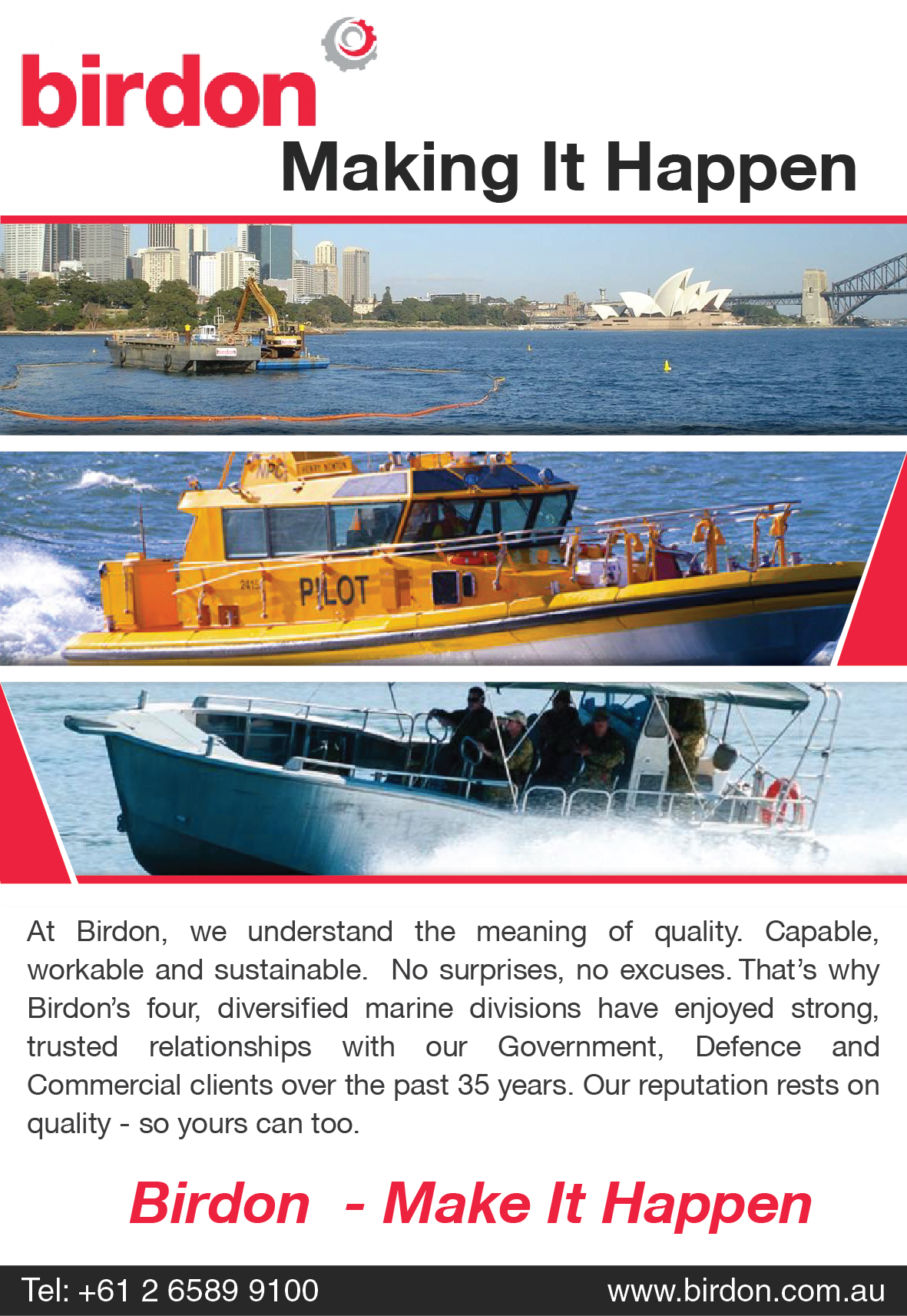 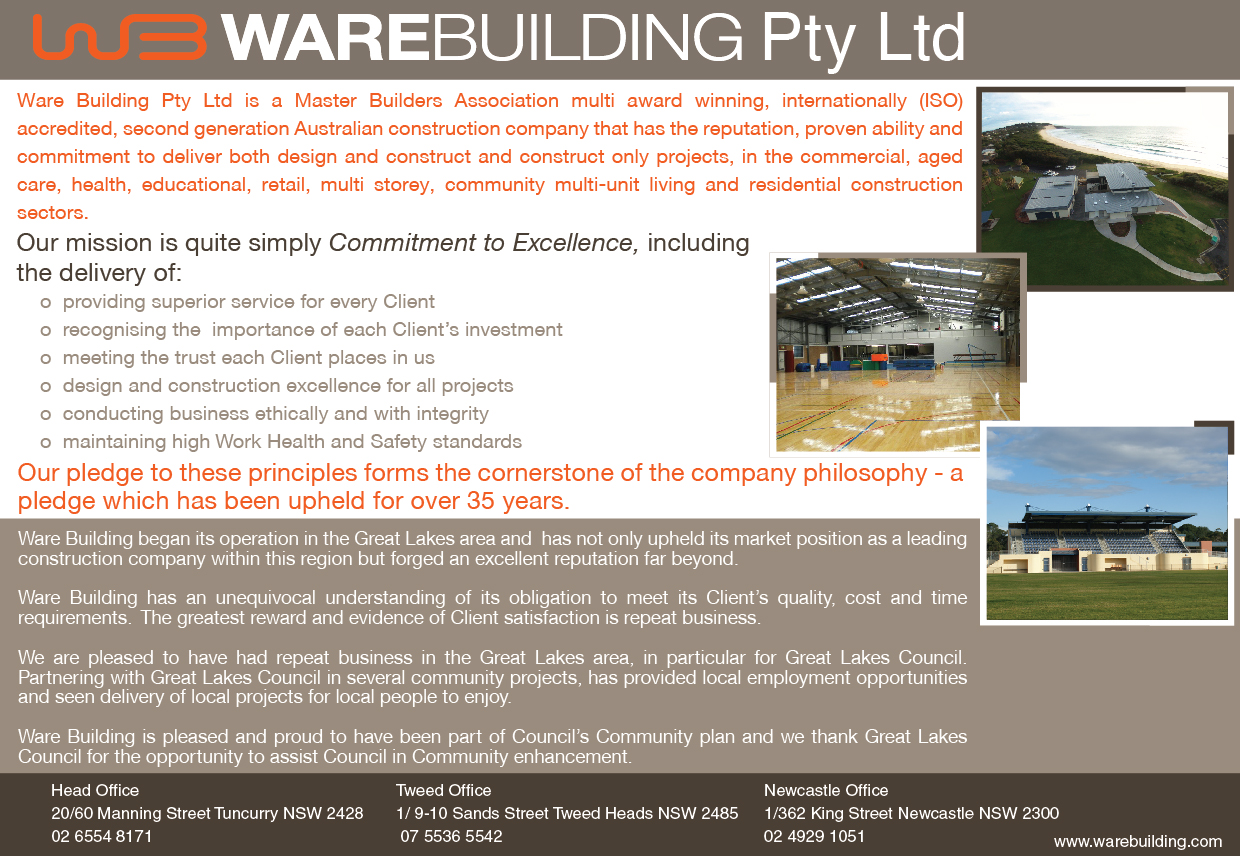 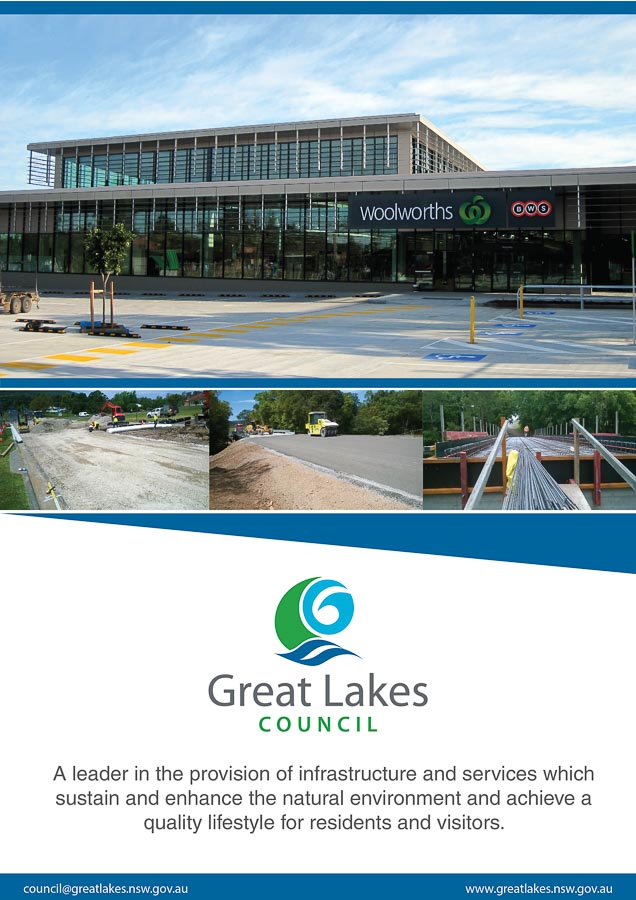